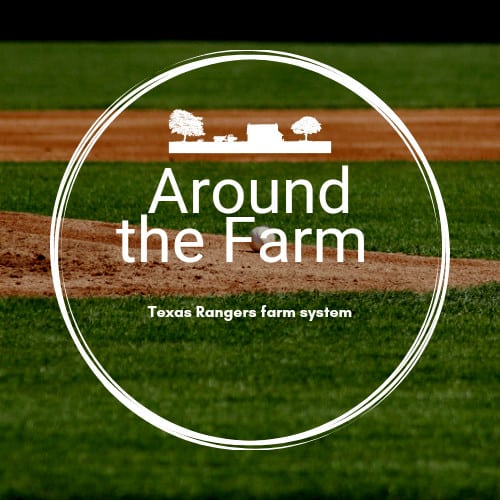 Welcome to Around the Farm 5/18/2021 edition. If you are new to around the farm, we take you through the games played throughout the Rangers farm system from the day or night before.

The top story on the night had to be Hans Crouse making his debut in AA. He pitched one inning for the RoughRiders in San Antonio against the Missions (Padres).

The Express are 9-3 on the season after their 8-5 win against the Skeeters (Astros) last night.

Left-hander, Joe Palumbo got the start and pitched two innings. He allowed one run on a home run, one walk and struckout one. He threw 28 pitches/14 for strikes. The Rangers are being careful and ramping their pitchers up as they go along.

Joe Barlow (0.00) earned his 3rd save. He allowed one hit and struckout one in his inning.

Charles Leblanc (.357) went 3-4 with an RBI. He has two of the four stolen bases on the night. Jason Hicks and Yonny Hernandez each had a stolen base.

The pitching staff as a whole deserves a shoutout for their shutout.

Hans Crouse pitched one scoreless inning. He threw 11 pitches-8 for strikes and struckout one. He’ll be ramped up as he goes. He just rejoined the team after his Fiancé gave birth to their child.

A huge shoutout to Jake Latz (3.00) for throwing 4.2 scoreless innings. He allowed two hits, one walk and struckout 6.

Diosbel Arias got the RoughRiders only hit. He scored on a wild-pitch after the bases were loaded.

Catcher Matt Whatley does it all. He got HBP, then promptly stole 2nd, his 3rd of the ssason. He worked two walks on the game.

The Hickory Crawdads are now 4-9. They lost 5-1 to the Greensboro Grasshoppers (Pirates).

Justin Slaten (0-1, 8.22) started for the Crawdads. He pitched three innings and allowed two runs on five hits. He struck out three and took the loss.

Joe Kuzia (0.00) pitched three innings. He allowed one unearned run on three hits and struckout one. He threw 47 pitches/32 for strikes.

Four players in the line-up had one hit a piece. Jake Guenther, Pedro Gonzalez, Frainyer Chavez and Miguel Aparicio. As of right now, the only player in the line-up hitting over .200 is shortstop Chris Seise (.222).

Defensively Chris Seise had a throwing error and Tiedemann had a pick-off error.

Left-hander, Joshua Javier (0.00) pitched a scoreless inning and struck out the side.

Defensively Luisangel Acuña had a throwing error, his 2nd on the season.

Jayce Easley had an outfield assist at home plate.

Unfortunately the DEWDs lost 5-1 to the Charleston Riverdogs (Rays). The Wood Ducks are now 9-4 on the season.

Hans Crouse made his 2nd start for the RoughRiders