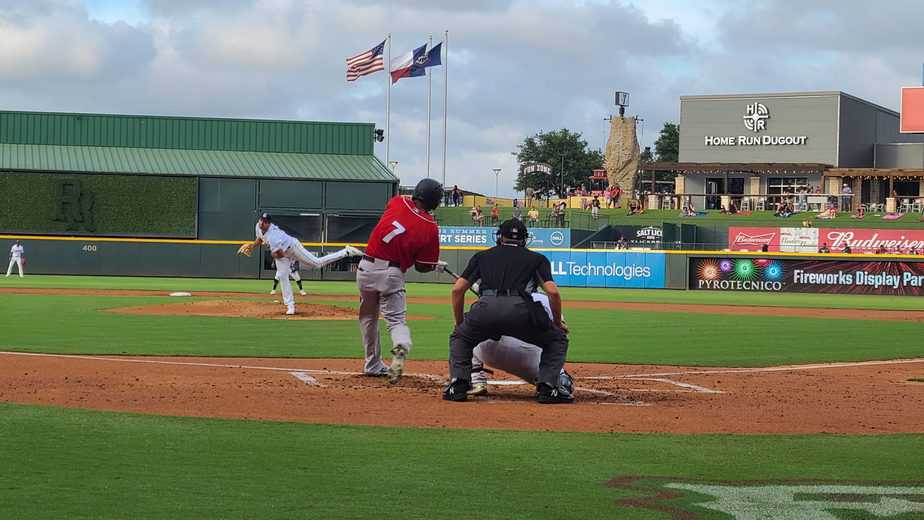 Round Rock, TX – A night after a come from behind, last at bat, rain shortened 7-6 win on Thursday, the Round Rock Express gave up 2 runs in the top of the ninth to lose to the Albuquerque Isotopes (Colorado Rockies) 2-1 in front of 5,773 on Friday night at Dell Diamond. In losing, Round Rock yet again wasted a strong pitching effort by the entire staff and by far the most impressive outing of 2021 from a returning to form Brock Burke. The southpaw Burke went five innings of shutout ball giving up only one hit while striking out 6 and walking 2. The lefty Burke also had a wild pitch and an almost wild pitch that ended with Isotope 3B Taylor Motter getting thrown out at home in the fourth inning. Burke finished his night having thrown 72 pitches, 40 for strike.

Jimmy Herget (1-1) came into the game in the 9th inning to hold a 1-0 Express lead, gave up both Albuquerque runs, both earned, took the loss while picking up just his 2nd blown save. Isotope lefty Zac Rosscup (1-0) pitched the 8th and 9th innings for Albuquerque picked up the win.

With the loss, Round Rock’s ninth in their last ten games and 15th in their last 20 evens their record at 28-28, keeping them in 3rd place in the (still very unstably named) Triple-A West East, 4 games back of Sugar Land, who lost 1-0 to Tacoma Friday and a game behind OKC who beat El Paso 15-11.

The Isotopes improved their record to 20-35, moving to 11.5 games behind the Skeeters.

Admittedly, in 2021, I’ve been hard on starter Brock Burke (0-4, 7.11), despite his on-going recovery from a torn labrum, but for the second consecutive start, the southpaw was lights out. As previously mentioned, Burke went five shutout innings and did not yield a hit until the 4th inning when he ran into the only trouble he faced. Lefty Burke also walked two, mixed in a wild pitch and an almost wild pitch in that troublesome 4th, but got out of it by striking out former Yankee Greg Bird and then tagging out Albuquerque 3B Taylor Motter at home for the ever popular 1-2-1 non-double play, double play. The only other runner allowed by Burke was Isotope leadoff hitter Ryan Vilade reaching on a Charles “Stop Calling Me Wade” Leblanc‘s throwing error in the first, who was promptly cut down by catcher Yohel Pozo (.288/.301/.519) attempting to steal second. Burke ended his night with a 1-2-3 fifth inning that included his 6th and final strikeout. Despite allowing the 4 runners Burke managed to face one batter over what was a 15 batter minimum. I’m not sure there are enough superlatives to cover Burke’s last 2 starts as July has been a page turner from his previous 2 months. The Chicago native has gone 9.2 innings giving up only 1 R/ER (a solo shot 7/3 vs Sugar Land) while allowing 5 hits, walking a borderline 4 but striking out an impressive 13 over that span. For perspective, lets look at his first 9 appearances (8 starts) vs his last 2:

It’s tough to make a call on a guy that made his Major League debut in 2019 but a corner has definitely been turned. My expectation is that he will make a few more starts for Round Rock before he gets the call up, if not for the mere acknowledgment of his hard work. Now that it’s been announced that there will be playoffs in Triple-A this season – lasting thru the end of Major League season – after all, any expected roster moves in September are now in question for Round Rock, and even Frisco.

Following Burke’s outstanding performance, relievers Jake Lemoine (4-1, 3.54), Luis Ortiz (1-1, 4.24) and Jharel Cotton (3-0, 3.66 & picked up H1) followed with an unspectacular yet scoreless performances. As mentioned in previous posts, statistically each one had nothing to write home about as they all had blemishes, be it a walk, a hit or both – ultimately it was three scoreless innings.

That would bring us to Jimmy Herget (L, 1-1, 2.30). Herget was called upon in the 9th inning, his 4th save opportunity of 2021, to hold a slim 1-0 lead that Round Rock had just picked up in the bottom of the 7th. All confidence was given to Herget not only because the Isotopes had already been held to only 3 hits on the night going into the 9th, but that Herget had been unscored upon in his previous nine outings and only 2 of his last 15, one of those two yielding a single unearned run. But Friday, 3 of the first 4 batters reached with it going single, sac fly, walk, RBI game tying single followed by a groundout that scored the winning run. By the time Herget got the 3rd out, the first two had already done damage. While it is alarming that with the game on the line the former 6th round Tampa native completely melted down, it probably could just as easily be brushed off as part of the growing process for the 27 year-old that already has 25 games of Major League experience under his belt. The righty has only been scored upon in 7 of his 21 appearances this season, including 4 of the first 5.

Ah yes, the plate. As good as the Round Rock pitching was, the hitting was equally as bad. While the offense was beginning to show some life towards the end of the Skeeter series and thru the rain shortened first game of this series, but at the end of the day (literally, at the end of the day) the Express mounted a total offense of 1 run on 5 hits and 4 walks. Once again, timely hitting eluded the Express as they went a combined 1-10 with RISP and left 8 runners on which can’t be good when you only have 9 runners total in the game. I’ll bet there’s a stat somewhere that proves it. Compounding the offensive trends is the 11-72 (.153) mark with RISP over their last 8 games.

As I review Friday nights game, there just aren’t any highlights. Delino Deshields (.272/.363/.389) went 1-4 while picking up Round Rock’s sole RBI (15), has seen his average drop from .363 on June 1st to it’s current .272. While it seemed inevitable at the time that Deshields would be returning to the Majors post haste, either to the Rangers or via a rumored trade to the Yankees, it does not appear as though there will be any movement soon.

Curtis Terry (.313/.392/.590) continues to hit the ball…HARD. Even his outs make you look. One thing of note to keep an eye on with the 6’2″ 258 lb. slugger is his OBP. While the right handed hitting Georgian has always hit for big power and is a career .294 hitter in his six minor league seasons, Terry has seen a decent .363 career OBP raised to .392 in 2021 and if he can keep up at that pace a decision will have to be made on the defensively limited first baseman that has not been protected each of the past 2 seasons. Terry went 1-3 and a HBP on Friday.

The Isotopes and Express tee it up again Saturday on Nolan Ryan Bobblehead night with the series even at one. First pitch at Dell Diamond is at 7:05. Gates open at six so with the whole bobble head thing…

Left hander Wes Benjamin (1-2, 6.75) takes the hill for the Express while Dereck Rodriguez (2-2, 7.31) son of Hall of Famer & Texas Ranger legend Pudge Rodriguez will lace them up for Albuquerque.

I take a ton of pictures each game and people ask about them so here’s a link to Friday-night’s camera roll. Yes, all pics are taken with a camphone, but it’s a pretty good one. Some pics are edited (with the original still there) but most are not. Also, at times you’ll see a bunch of the umpiring crew, as some of you may or may not know I’m friends with some guys at the Major League office and I forward those pics on to them to pass on to the crew. Not all of those guys will make the Majors either and they usually get a kick out of seeing pics of themselves on the field.

Below is the link to the picsfrom game 1 of the Topes/E-Train series Thursday night.