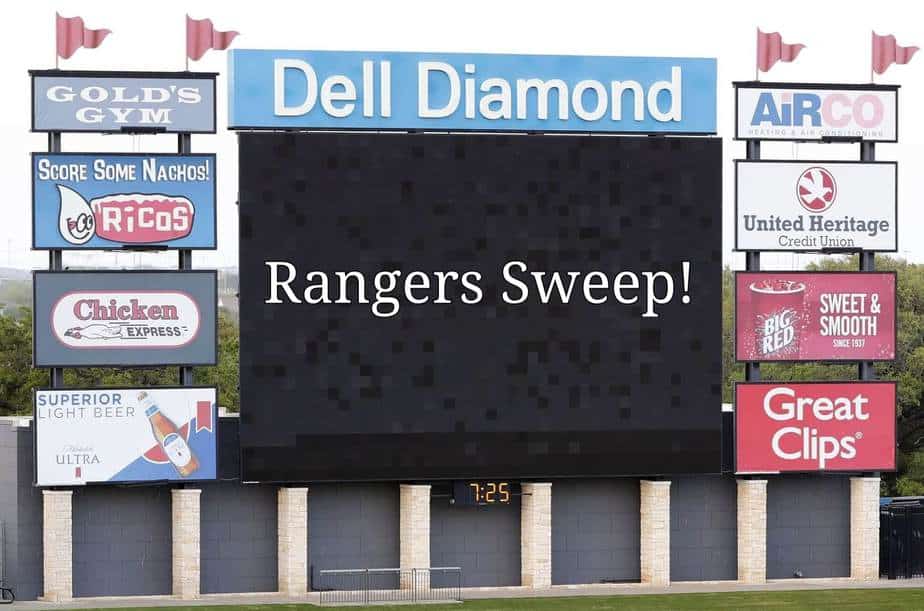 The Rangers alternate site sweeps the Astros alternate site. Of course it was only a two-game series but it’s not every day that Rangers fans get to see the words ‘Rangers’ and ‘Sweep’ in the same sentence with the Rangers doing the sweeping.

For the record, the Rangers alternate site team record is now 4-2-1.

The Rangers sent right-hander Sam Gaviglio to the mound to start the game. He went 3.2 innings and allowed two runs on four hits and struck out four.

Spencer Patton was the first on in relief and pitched 1.1 innings, allowing only one hit. He also struck out a batter.

Blake Bass didn’t surrender a hit in his 3 scoreless innings only walking one and struck out three.

Joe Barlow pitched one inning. He allowed two runs on one walk and one hit. He struck out one as well.

The Rangers line-up seems to have had a little spark of late. Of note is that Carl Chester hit his 2nd home run (418′) in as many games. He hit the walk off home run the day before.

The Rangers scored in the bottom of the 1st inning when Charles Leblanc brought in Anderson Tejeda who had singled earlier.

The Astros’ line-up wasn’t going to let the Ranger have all the attention, 2nd baseman Colton Shaver hit a two-run home run in the top of the 2nd to pull the Astros ahead.

The Astros lead didn’t last long as the Rangers bats responded by bringing 4 runs across the plate in the bottom of the 2nd, taking the lead for good. Carl Chester led things off with a double. Diosbel Arias then hit a single. Frainyer Chavez grounded out but scored Chester. Delino DeShields then doubled followed by Anderson Tejeda with an RBI single. Leftfielder Jason Martin hit into a fielder’s choice which brought in another run. Charles Leblanc brought in the fourth run with a sac-fly to center. The score was 2-5 Rangers.

The Rangers wouldn’t score again until the bottom of the 5th when Jason Martin worked a walk and then infielder Charles Leblanc doubled to bring Martin home. Catcher Matt Whatley had an RBI single as well.

The bottom of the 6th inning is when Carl Chester hit his no doubt 418 foot home run.

The Astros tried to come back in the 9th. Jose Siri had a two-run home run for the Astros but ultimately the Rangers closed things down for the win.

The Rangers won 8-4 with Blake Bass earning the win.

The next game for the Rangers Alternate site will be against the Kansas City Royals Alternate site at Globe Life Field for a two-game series starting on Friday. First pitch is set for 3:05 PM.

The Rangers will be in Chicago playing the White Sox.