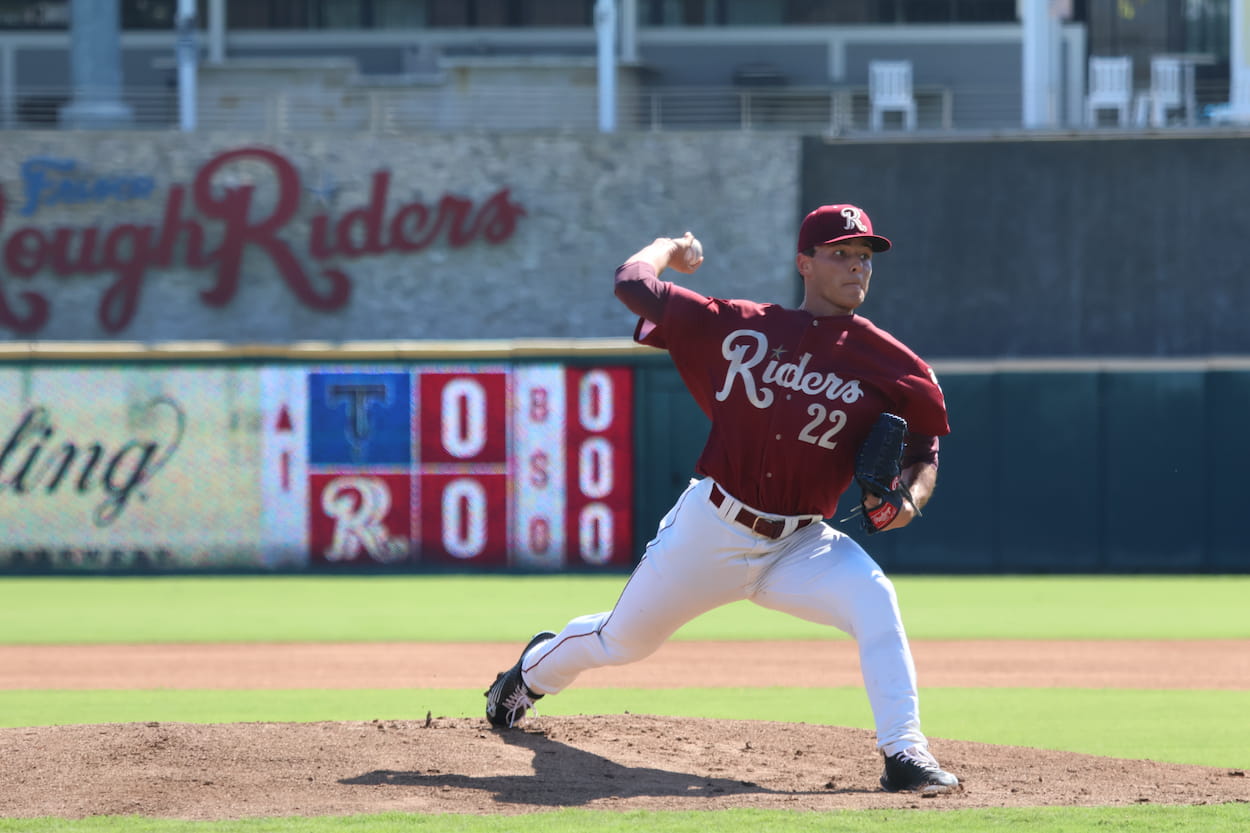 Jack Leiter made his last start at Riders Field for the regular season. Hopefully the RoughRiders make the postseason and we can all enjoy Jack Leiter making his first professional post-season appearance. The RoughRiders currently lead the Midland RockHounds by 1.5 games for first place in the second half of the season.

The RoughRiders lost the series opener to the Tulsa Drillers by a final of 11-7 but Leiter did not factor into the decision. The Drillers jumped on Jack in the top of the 1st working a lead-off walk and then a 2-run home run off the bat of Justin Yurchak.

Leiter settled down after throwing 9 straight strikes to set down the next three Drillers with swinging strikeouts.

Leiter only pitched four innings. He allowed four runs, three earned runs on four hits and three walks but it’s not as bad as it sounds….I promise.

Leiter had the fastball working hitting up to 98 mph from what I saw on the gun. He struck out six Drillers and generated 17 swings and misses of 38 swings through his four innings.

The RoughRiders answered the Drillers in the bottom of the 1st by getting a run of their own. Hot-hitting Blaine Crim hit an RBI-Double scoring Jonathan Ornelas who had doubled earlier.

In the bottom of the 3rd, the RoughRiders took the lead by scoring four runs. Justin Foscue brought in Jonathan Ornelas with a sac-fly to left field. The big hit for the RoughRiders was a three-run home run off the bat of Kellen Strahm to give the RoughRiders a 5-4 lead at the time. It was Strahm’s 9th long ball of the season.

The RoughRiders added one run in the bottom of the 7th and the 8th but unfortunately the Drillers added 7 runs with three in the top of the 5th, one in the 8th and three more in the 9th.

The RoughRiders used four bullpen arms with Tai Tiedemann replacing Leiter in the top of the 5th. He pitched 2/3 of an inning allowing two runs on two walks and a strikeout. He was replaced by Kevin Gowdy who walked a batter and gave up a double scoring two runs. Those two runs were charged to Tiedemann.

Gowdy pitched 1/3 of an inning, allowing one run on one hit and three walks.

Seth Nordlin (2.98) pitched three innings allowing one run on two hits, including a home run, one walk and two strikeouts.

Josh Smith (3.58) came in for the 9th and allowed three runs on four hits. None of the five pitchers the RoughRiders used had a scoreless outing.

The RoughRiders play the second game of series Wednesday night. They send RHP Tim Brennan to the mound. First pitch is set for 6:35 PM Central. Tom Grieve is set to join the RoughRiders for Texas Legends Wednesday.

The RoughRiders post-season hopes are alive. They lead the Texas South Division by 1.5 games over Midland.