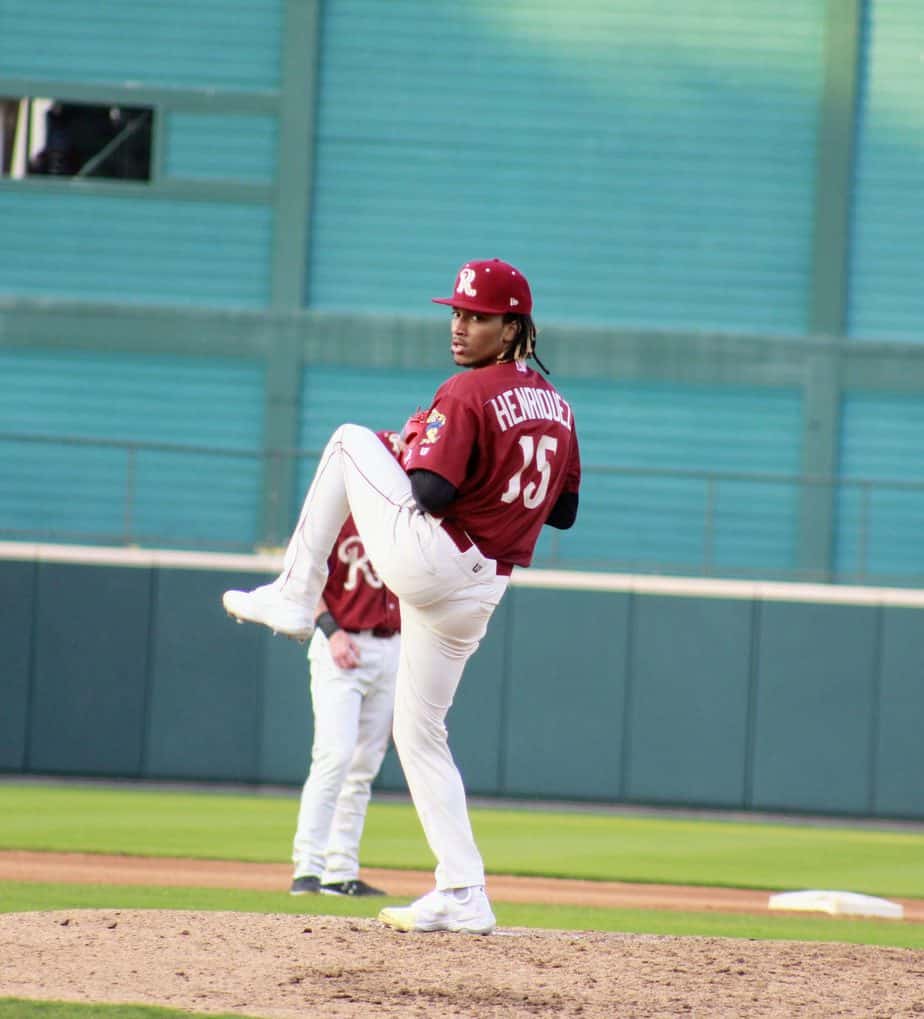 The Frisco RoughRiders rallied late on Patriots night to win 7-4 in front of 8,493 fans. This win brings their record to 61-50 which is good for 1st place in the Double-A Central South.

The San Antonio Missions (Diamondbacks) struck first in the top of the 2nd when Dwanya Williams-Sutton hit a three-run home run (4) to left field.

The RoughRiders were able to get one run back in the bottom of the 2nd when Josh Stowers hit a two-out RBI single.

The Missions struck again in the top of the 3rd when Esteury Ruiz hit a solo shot (10) to left field.

Henriquez settled down and didn’t allow another run to cross. He pitched five innings and allowed four runs on on four hits, (two home runs) and five strikeouts.

Left-hander Sal Mendez pitched three scoreless innings. He allowed one hit, issued two walks, struckout three. He had a WHIP of 1.00 in this game. Mendez earned his 5th win of the season and lowered his ERA to 4.66.

The RoughRiders walked the bases loaded in the bottom of the 6th with no outs. Justin Foscue grounded into a force out (SS to 2B), which scored Josh H. Smith. The Riders now trailed 4-2.

The RoughRiders had a rather eventful 8th inning that included a rally and manager Jared Goedert getting ejected.

To start off, Bubba Thompson worked a walk. Josh H. Smith flied out. Then, Davis Wendzel hit his 5th home run of the season, a 2-run shot to left-center to tie the game at 4-4. Sam Huff drew a walk, Justin Foscue was HBP, then the hero of the night, Melvin Novoa hit the game-winning three-run home run. It was his 4th of the season. Josh Stowers was called out on strikes after a 9-pitch at-bat. That’s when Jared Goedert was ejected. Jax Biggers then flied out to end the inning.

The Viper, Chase Lee (1.35), struck again. He earned his 3rd save of the season by striking out the side in his inning of work on 17-pitches/14 were strikes. One of the strikeouts was a called 3rd strike and the other two were swinging.

As of now the RoughRiders have the 2nd post-season spot them by a percentage of .001 which is slightly ahead of the Arkansas Travelers (Mariners, 62-51). It’s safe to say this next series against the Amarillo Sod Poodles is going to be important.

Sunday September 12th, Right-hander Zak Kent (0-3, 5.60) toes the rubber for the RoughRiders against RHP Moises Lugo (0-1, 2.53) for the Missions. It is fan appreciation night where the RoughRiders will be wearing some sharp uniforms full of pictures of fans and will be giving away a ton of prizes including season tickets.

Down on the Farm! Well i guess Journeys song didn’t help! DE had a man on but nothing happened! DE JUST RAN OUTTA OUTS tonight! DE was defeated tonight 8-5! JH

Down on the Farm! DE Pitcher Leury Tejeda just did not have his best stuff tonight like he always does😢! Going 1 inning 4 hits 3ER 35 pitches! DON’T STOP BELIEVING we can come back!!!! LETS GO DUCKS!!! JH

Down on the Farm! DE tied the score at 5-5 B8! But top 9 Charleston score 6-5 and off of Leury Tejada now they have bases loaded 1 out! JH

Down on the Farm! B7 5-2 DE Pitcher Michael Brewer has settled down Charleston! Now its time for the offense to get going! Charleston Pitcher Seth Johnson is 1 of Tampa Bay Top Pitching Prospect! Just got replaced by Antonio Jimenez! LETS GO 🦆!!!JH

Down on the Farm! DE replaces Matthews with Michael Brewer! Brewer gives up 1 hit 1 SO! B6 but still down 5-2😢! JH