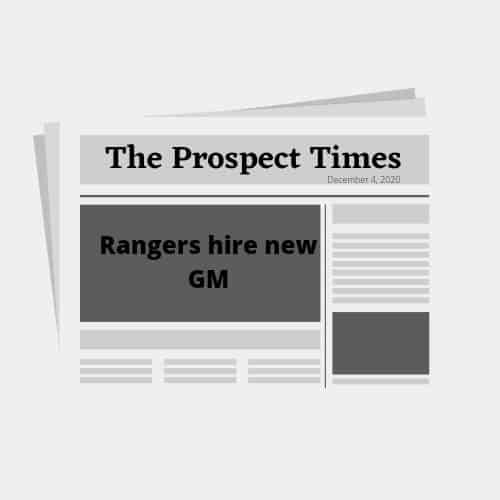 For all of you that haven’t been on the Jon Daniels band wagon in years, I’ve got good news! The Texas Rangers new GM is Chris Young. The bad news is….Jon Daniels is still the President of Baseball Operations and will have the final say in baseball decisions.

Chris Young becomes the Ninth GM for the Rangers

With this hire, Chris Young, 41, becomes the Texas Rangers 9th General Manager. I believe he will be the 2nd tallest GM in baseball history at 6’10.

In his playing days, Chris pitched for the Rangers in 2004-05 and had a 15-9 record in 38 starts with a 4.34 earned run average. He also played for the Padres, New York Mets, Seattle Mariners and the Kansas City Royals.

He was promoted in February 2020 to his most recent role with MLB as the enforcer of discipline where he decided on fines and suspensions.

Chris interviewed with the Mets for their General Manager opening but ultimately the Rangers brought the Highland Park native back home.

I will reserve judgement before pretending to know how he or the team will perform under his tenure at GM but I’ve seen a number of tweets mentioning his people skills and baseball mind. I’m curious to see how much influence he will have with Jon Daniels on roster decisions. Buster Olney tweeted about MLB and the Players Association missing an opportunity to have him involved in central baseball business.

Getting Chris Young is a coup for Rangers. He is considered perhaps the brightest, most well-rounded and universally respected officials in game.

Chris Young will excel in his front-office work, but I can’t help but think the fact that he is out of a position of central influence is a major missed opportunity for MLB and the Players Association. Baseball needs progressive, cooperative and collaborative minds right now.

Congratulations to Chris Young and to the Rangers in bringing him on as their Executive VP & GM! One of the brightest minds in the game stays in his hometown. MLB offices will miss him, but he will have great impact on game in his new position. #CongratsCY

Although Chris Young has no prior experience in the role of a GM, there is something about a former player as the Rangers GM that excites me. They Rangers aren’t expected to pursue any top-tier free agents so this may be the most exciting and franchise-altering decision for the future the Rangers make this off-season.

What do you think about Chris Young as the Texas Rangers new GM?