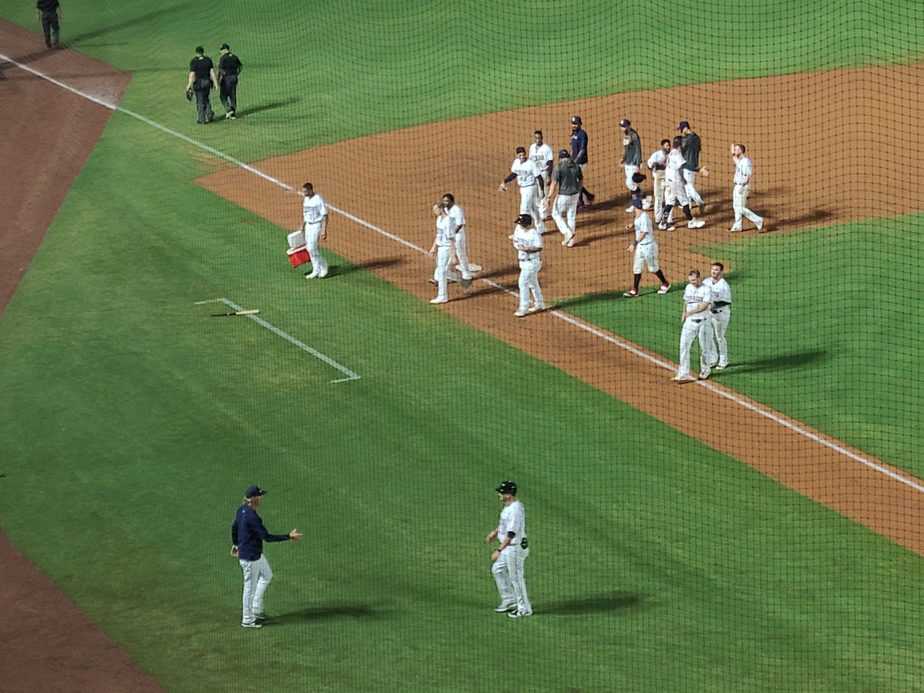 Round Rock, TX – The Round Rock Express, fortified by seven innings of 3 hit, shutout pitching from the bullpen, ended their 5 game losing streak, beating the OKC Dodgers 4-3 in 11 innings. Scott Engler (1-0) got his first Triple-A win in relief, former Chihuahua great Kevin Quackenbush (1-1) took the loss. Charles “Stop Calling Me Wade” Leblanc singled home recent call-up Ryan Dorow with the winning run in the 11th, sending the Monday night crowd 4,722 home happy but wet due to the late inning storm that blew in in a marathon game that took 3:58.

In what nobody realized was a historic game due to recent rule changes, we got to see the new mechanic for umpires checking every pitcher for foreign substances. EVERY pitcher.

While many fans and players alike grumbled about the new rules, per an MLB source who wished to remain nameless, pointed out that it went without a glitch and relatively unnoticed. As for the players complaints – none of which were visible to the crowd – the source from MLB stated simply “Hey, the MLBPA is who wanted this. They just want the umps to do the policing.”

Brock Burke (0-3, 9.85) got the start for the Express and fared with mixed results. His final line of 4IP 3H 3R/ER 2BB & 3K was not indicative of the effort. The lefty Burke, at times showed the brilliance that made him the Rangers No. 7 ranked prospect in 2020, while at others showed that he still has a long way to go in his recovery from a torn labrum that cost him the 2020 season. The strongest indication that his stuff is beginning to return was the ground out to fly out ratio of 7 to 1. Burke only allowed 3 balls in the air; one for an out, one for a double and the other went for a homer by the massively, huge mountain of a man DJ Peters. While Burke found himself in trouble early and often during the 3rd inning, the 26 year-old Evergreen Colorado native finished with a strong 3 up and 3 down 4th inning to end his night. Burke finished throwing 69 pitches, 44 for strike, lowering his ERA by a little over a half a run. If the rotation stays as is (it won’t) Burke will get a chance to pick up where he left off next Monday in El Paso.

What followed was a cavalcade of pitchers that included Joe Palumbo (0-1, 7.94), Jake Lemoine (4-0, 2.11), Jason Bahr (0-1, 14.00), newcomer “Bigg Shaun” Anderson (1-0, 0.00), Joe Barlow and recent callup, game winner Scott Engler. Long story short, they didn’t suck. The six combined for 7IP, 2H, ZERO runs, walking 2 while striking out 7. Aside from the excellence from the pen as a whole, it should be noted that Palumbo, in his first appearance since May 24th (back strain) struggled getting the ball over the plate from the outset throwing only 7 of his 17 pitches for strike in his 0.1 inning of work while allowing 3 of the 4 batters he faced to reach base. Lemoine entered the game with the bases loaded and promptly threw one pitch, getting the pitchers best friend, a 6-4 double play to end the inning. No further information on Palumbo’s status was available at the time of this post

With the well deserved call-up of INF Andy Ibanez (.352/.410.648) – predicted here Sunday – there was a noticeable difference to the feel of the lineup. While the Express did win the game, there were seemingly an endless amount of missed opportunities and there were plenty of them. Round Rock’s eight hits is a pedestrian total, however they also took 8 walks, their second highest total of the season but winded up going 3-12 with RISP and stranding 11 runners. Timely hitting was not Round Rock’s friend on Monday.

The biggest, if not the most timely hitter of the evening was RF Carl Chester (.221/.270/.431) went 2-4 with 2 RBI, a double (4) and a stand up inside the park home run (4) that brought the home crowd to life. Chester, mired in 7-45 June slump, drove in the tying run in the 6th on a run scoring double. Chester also reached three times and stole his 5th base of the season.

In other news from the bats, DH Curtis Terry continues to do Curtis Terry things as he hit his 12th homer while driving in his 33rd RBI in his 39th game of the season. Terry, currently averaging a home run every 11.92 AB’s, reached base three times.

Yonny Hernandez (.244/.441/.293) currently fifth in the league in OBP went 2-4 with a walk, while entering Monday night in the midst of a 2 for 20 slump, had still reached base in 9 of the 11 games he’s appeared in since his return from the Venezuelan National Team. If the 23 year-old infielder can get his bat going, his value will sky rocket.

The Express and Dodgers resume the Red Dirt Rumble Tuesday night at Dell Diamond with Round Rock holding a 6-5 edge in the rivalry. Newest Round Rock resident Tyler Phillips (1-2, 4.70 at Frisco) takes the bump for the Express in what’s expected to be a bullpen game for Round Rock. The Dodgers send out current Express killer and former Ranger Austin Bibens-Dirks (4-1, 4.41) seeking his 4th victory in 4 starts against Round Rock in 2021. First pitch is at 7:05 pm.