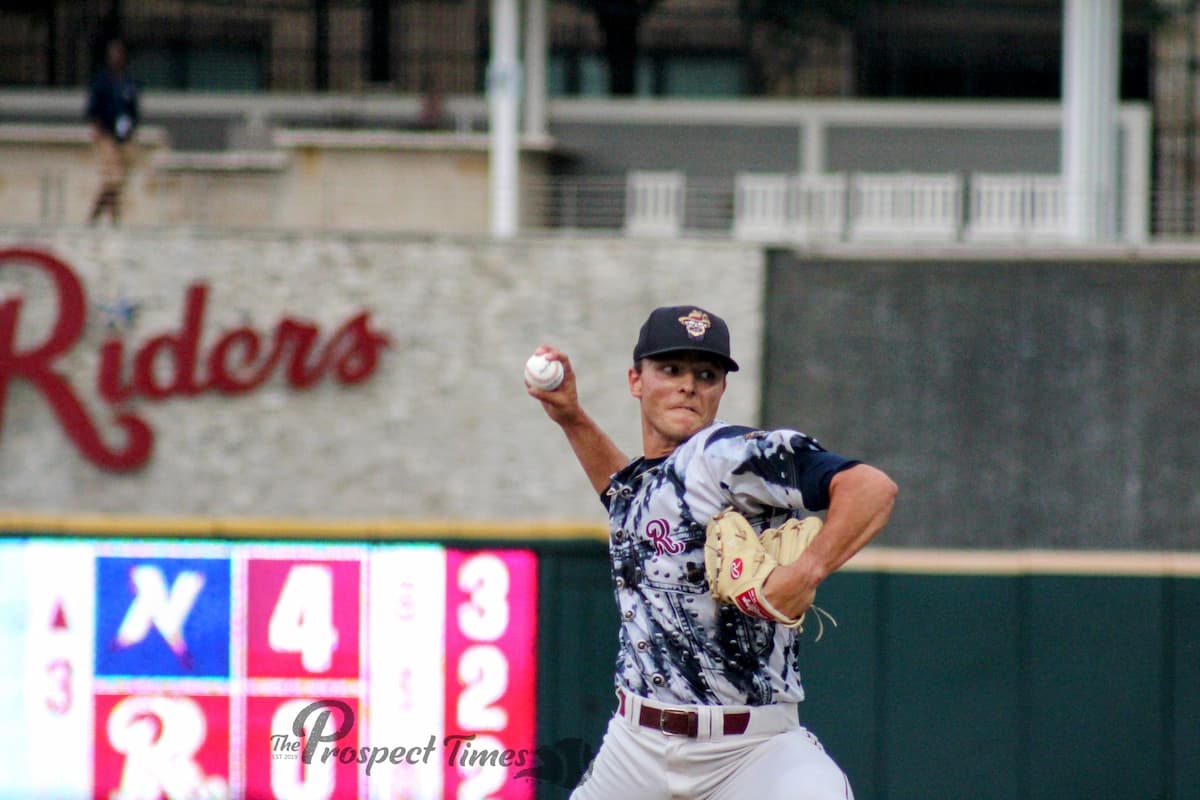 Tonight was supposed to be what may have been the pitching match-up of the season in Frisco. Jack Leiter, the Rangers # 1 against left-hander Asa Lacy, the Royals # 4 ranked prospect. Unfortunately, that didn’t happen as Lacy was scratched just a couple of hours prior to first pitch. I’m sure some of the 6,777 fans that showed up were slightly disappointed.

It was Jack Leiter’s 3rd start of his professional career and the 2nd at Riders field. It also turned out to be his shortest his three outings. We saw a good mixture of speed topping out at 98 and saw 78 on the off-speed.

In the top of the 1st Leiter started off with a 3-0 count to Maikel Garcia but then threw 5 strikes to get him swinging. He proceeded to strikeout the next two batters on eight pitches.

In the top of the 2nd with a couple of runners on the crowd at one point let out a sarcastic cheer for the homeplate ump when he called a strike. Leiter threw a 98 mph-heater to get Jake Means swinging.

Leiter worked a 3 ball count on eight of the sixteen batters he faced but there were a couple of strikes that were called balls. At one point in the game, Leiter showed some emotion on the mound in disagreeance with the ump and it’s safe to say the crowd disagreed as well.

Leiter’s defense didn’t help him out either. The Foscue error in the top of the 3rd was costly and the Naturals scored four runs. So all of the runs Leiter allowed were unearned.

After Leiter walked Nate Eaton, Tai Tiedeman releived Leiter in the top of the 3rd with two outs and was able to get out of the inning with no further damage done.

The RoughRiders lost 12-4 and move to 10-4 on the season. They will need to win today in order to split the series.

Despite the loss there were some good performances at the plate.

JP Martinez hit his 2nd home run of the season a 2-run shot and he finished 2-for-5 with 2 RBI.

Ezequiel Duran has some power in his bat. He makes hard contact. He hit his 1st home run of the season in the bottom of the 9th. It traveled 437 feet and came off his bat at 107 MPH.

LHP Cole Ragans (0-0, 1.17) is scheduled for his third start of the season for the RoughRiders and enters with 11 strikeouts in his 7.2 innings this season. First pitch 4:05 PM Central.