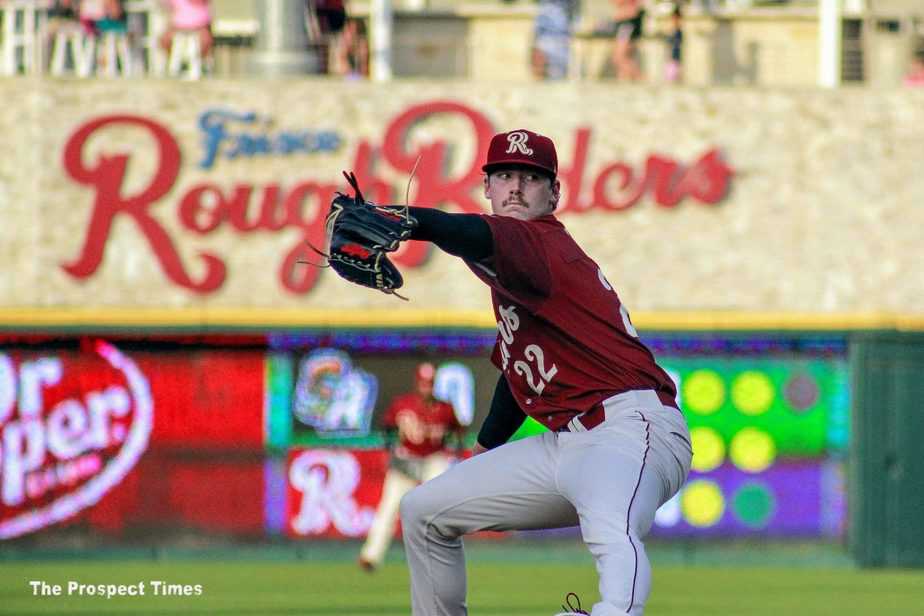 Frisco, Texas June 26th – 4,785 fans made it out to Frisco in the 92 degree heat to watch the Riders win their 9th in a row. Those of us that stuck around saw a wild finish. The RoughRiders won on a interference by the 2nd baseman with the Riders 2nd baseman, Jax Biggers.

Cole Winn looks like the Rangers top pitching prospect. He started the game with a 2-3 record and a 2.56 earned run average. He lowered his ERA to 2.27 and that is 2nd best in the Double-A Central.

He hit up to 94 MPH on the radar gun and threw a lot of off-speed. Winn isn’t afraid to throw any of his pitches in any count. I don’t believe he will be in Frisco much longer.

Tyler Thomas (5.23) was credited with his 2nd hold. He threw one inning, allowing one run on two hits and struckout one. The highest reading I saw on Thomas was 90.

Nick Snyder was really impressive. This is the first I’ve seen him in person. He was hitting as high as 99 mph on the fastball in his 1.2 innings. He gave up two hits and had three strikeouts.

Josh Jung got the RoughRiders in the board in the bottom of the 1st inning. He hit the 2nd pitch he saw and took it for a ride to left field. It was his 3rd home run of the season.

The Riders walked off for their 9th win in a row. Anderson Tejeda struckout for the 1st out. Catcher Matt Whatley singled to centerfield on a 0-2 pitch. Jax Biggers singled on a ground ball to shortstop CJ Abrams. Bubba Thompson then doubled, his 7th on the season. In the process, Matt Whatley scored. Also Jax Biggers tripped due to interference from the Missions second baseman, Eguy Rosario. On what otherwise would have been an out at home, Jax Biggers scored and the Riders secured their 9th win in a row.

The RoughRiders move to 31-16 on the season and maintain 1st place.