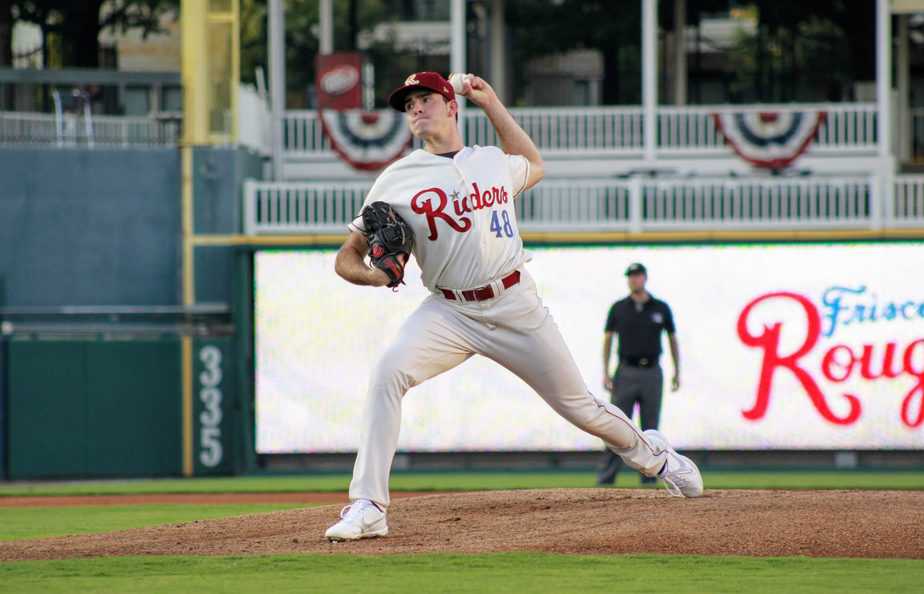 Bubba Thompson hit a ball 403 feet to left center field to put the RoughRiders on the board in the bottom of the 1st. They held the lead until the top of the 3rd.

I saw Bradford top out at 90 in the 1st inning of the game and as it went on he sat at 87-89, his off-speed bottomed out at 78. He pitched 5 innings and allowed four runs- three earned on seven hits and five strikeouts.

Right-hander Tai Tiedemann replaced Bradford in the top of the 6th. Taidemann works fast and only allowed one unearned-run over his three innings pitched. He was tagged with his second loss. Throughout his outing I saw as high as 91 and as low as 80 although I wasn’t looking at the gun between each pitch.

Chase Lee pitched the top of the 9th inning and had the slider ready to go which generated a swinging strikeout of Ethan Skender. He struckout two with one swinging and the other called. He’s got a 1.46 earned run average.

The RoughRiders scored four runs on ten hits. They earned one walk and struckout nine times.

Diosbel Arias, Justin Foscue and Jax Biggers each had a two-hit game.

Bubba Thompson had a lead-off home run in the bottom of the 1st to give the RoughRiders the early lead. He sent it 403 feet to left center for his 14th of the year.

The run in the 3rd came from an RBI single from Davis Wendzel.

Josh Stowers hit his 18th home run of the season in the bottom of the 4th.

In the bottom of the 5th, Justin Foscue doubled to left which scored a hustling Davis Wendzel from 1st.

The Missions scored the winning run in the top of the 7th.

Defensively, it was a rough night for the RoughRiders as they committed four errors which proved to be costly.

The RoughRiders fall to 59-49 and still searching for that 60th win, which leads seems to be eluding them. They are still in 1st place in the Double-A Central South but they are trying to hold off the Arkansas Travelers for the 2nd post-season spot. They need to get back into the win column.