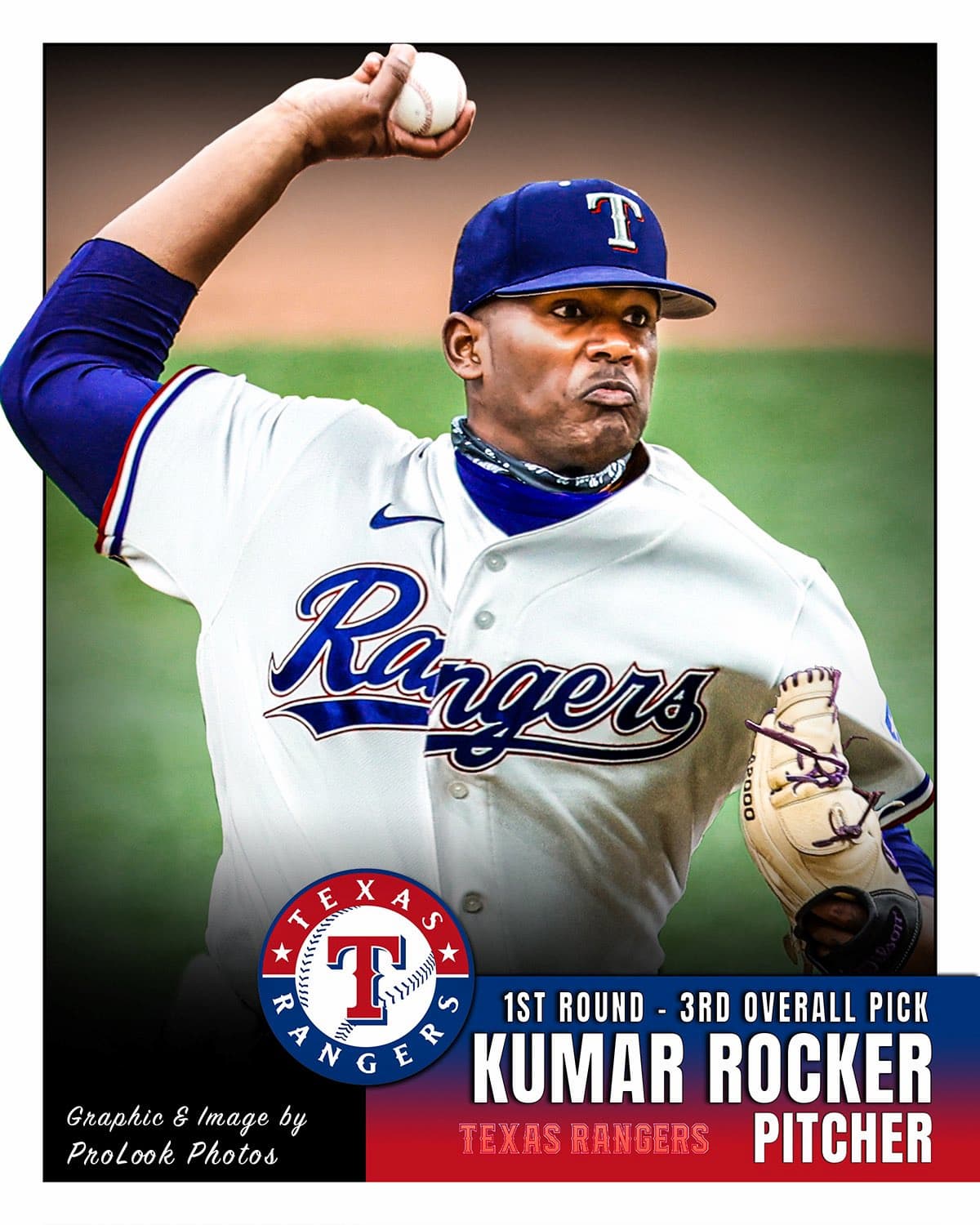 Now that the Texas Rangers 2022 draft is complete it is the perfect time for a draft recap.

The Texas Rangers picks break down into the following positions:

The Texas Rangers gave up a compensation pick when they signed both Marcus Semien and Corey Seager to contracts last winter so they were without their 2nd or 3rd round pick.

The Texas Rangers shocked all of baseball when they selected Kumar Rocker with the 3rd overall pick.

Everyone is familiar with Kumar Rocker by now so we won’t rehash what he did with Vanderbilt or the Mets not signing him story.

Rocker apparently has looked even better than he did with Vanderbilt while pitching in the Frontier League. His fast ball was sitting 94-96 but reached up to 99 mph. In his 5 starts, he had a 1-0 win-loss record with a 1.35 earned run average in 20 innings. He only walked 5 batters and struckout 32 and had a 0.750 WHIP.

The Rangers and Rocker have already agreed to terms on a $5.2MM bonus.

Porter is a right-handed pitcher who was ranked as the No. 11 prospect by MLB prior to the draft. Porter is also strongly committed to Clemson so signing him might prove to be a challenge. The savings with signing Rocker under slot value will certainly help and I have no doubt the Rangers are confident they can sign him.

Porter threw an impressive three no-hitters. For the season he posted a 0.41 earned run average and struck out an impressive 115 opposing batters in 58 innings pitched. He was also named as Michigan’s Gatorade player of the year.

Pollard, 18, is versatile playing shortstop and outfield but is now listed as an outfielder. He is committed to Washington State.

Tommy Specht is an outfielder from Wahlerrt HS in Iowa.

In addition to college baseball, he pitched in the Cape Cod Summer League in 2021 posting an 0-2 record with a 3.10 earned run average in 29 innings.

Ramirez has a fantastic sinker that sits in the low-90’s, nice curveball. He can reach up to 96 mph on his fastball and throws a change as well.

Brosky, 23 in September, is a right-handed pitcher out of Youngstown State University.

Drake, 22, is a left-handed pitcher and local to the DFW area. He is from Sachse and went to Wylie High School.

He also pitched in the Cape Cod League and had a 0.56 earned run average in 16 innings. He only issued two walks and struckout 25.

Marcum, 19 in August, is a right-handed pitcher out of Paola HS. Baseball America had him ranked #445. It remains to be seen if the Rangers will be able to persuade him to sign.

Owen, 20, is a right-handed pitcher drafted out of Grossmont College. There’s not much information out there about him.

Goodman, 18, is a shortstop from Medfield High School.

You could say the Rangers went bananas with this pick. Carson pitched for the Savanah Bananas. He had a 1.61 earned run average with 32 strikeouts compared to 3 walks in 22.1 innings.

Justin Sanchez, 18, is a left-handed pitcher listed at 6’0 and 185 lb. He is committed to South Florida.

Grayson Saunier, 18, is a right-handed pitcher who is committed to Ole Miss. It sounds like it’s going to be tough to pry him away from that commitment. Baseball America had him ranked at #181.

The Rangers are probably going to have issues signing some of these players they drafted in the later rounds so don’t be surprised to see some of them honor their commitments. If they do manage to sign Brock Porter (I think they will) then this is a solid draft for the Texas Rangers.