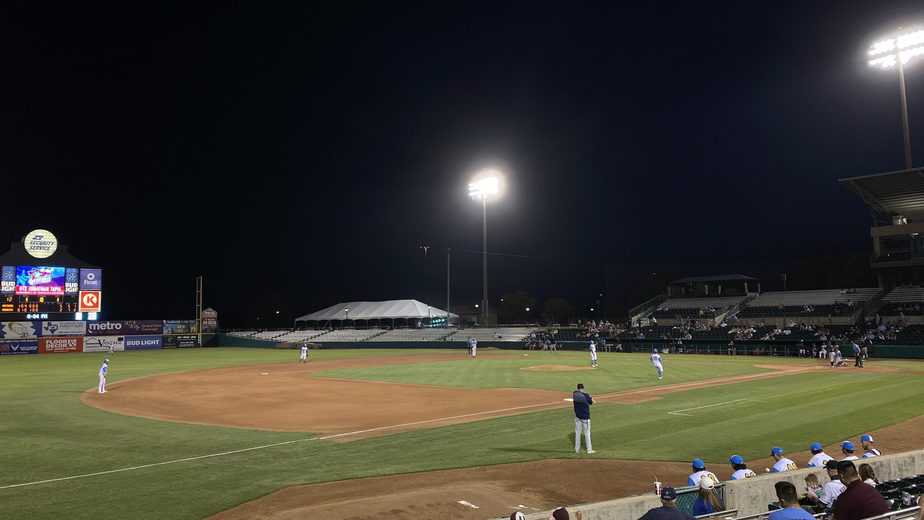 A (literal) dark cloud hangs above the ballpark an hour before the first pitch of game two in the second game between the Flying Chanclas and the Victoria Generals. The missions enter this game having lost two in a row to the Generals, and are hoping to avoid making it a third. Although two games may not seem like a cause for concern, every game counts in a shortened season.

As the (again literal) dark cloud above passes, we see the bright side of things. At the midway point of the season, The Chanclas have put themselves in a great position to not only make it to the playoffs but potentially win their division as well. The Chanclas come into today’s game toting a record of nine wins and six losses and are currently tied for first place with the Bombers.

Derek Klosowski [Midland College] takes the mound first for the Flying Chanclas. Klosowski enters this game with a 1-0 record and a 2.61 era in his 3 appearances. Over his 10.1 innings pitched, Klosowski has recorded 7 strikeouts and only 4 walks. In his last appearance against the Hairy Men, Klosowski went 3.2 innings giving up 2 runs on 6 hits and striking out 3.

It was tough sledding for Klosowski in tonight’s game. Over 4 complete innings, Klosowski would give up 5 runs on 5 hits. Although he did have 4 strikeouts and only 1 walk, Klosowski would hit 3 batters, and that one walk would score a run as the bases were loaded. Coming in to relieve Klosowski would be the righty from Laredo, Arturo Guajardo [UTSA]. Guajardo would, however, find success in shutting down the aggressive Generals. Over his 3 innings, Guajardo gave up no runs on 3 hits and struck out a third of his batters faced in the process.

For the second night in a row, we got free baseball. Entering the game for the Flying Chanclas at the top of the 10th would be Garrett Egli [Sam Houston St.]. With a runner starting on second base, a quick SAC bunt off of Egli would move the runner to third. Fortunately for the Chanclas, a flyout and an exciting play at the plate would end the inning for Egil, score still 5-5. However, much like DeLeon, Egli’s second inning was a little more difficult than the last. After a wild pitch moved the base runner from second to third, Egil would give up a base hit which pushed a run across the only run of the inning.

The Flying Chanclas hope not to repeat the same outcome as the last game. To do so, the club made a couple of changes to today’s line up. Catcher Tyler LaRue [Rice] moves up to hit cleanup and Ryan Flores [UIW], who drove in 2 runs last game, is now batting third. Besides moving around the order, the coaching staff for the Flying Chanclas made two defensive changes. Johnny Hernandez [St. Marys], who played 3rd in the last game, was moved to 2nd base. Additionally, Grant Smith will make his way into today’s line up, playing 3rd base and hitting 9th.

A number of Flying Chanclas had multiple hits in the game. Catcher Tyler LaRue went 3 for 5, only missing a home run to complete the cycle. The squad was able to garner 12 runs for the game. Striking in the second inning was Grant Smith as he hit a single to the left side that would score one. Smith would again hit another single in the fourth that led to a run due to a throwing error made by the Generals center fielder. The next run would come five innings later in the ninth, and that’s when the Flying Chnclas bats really came alive.

Down 5-2 at the bottom of the 9th, the Flying Chanclas side was not done. Combining for 3 runs on 4 walks and 2 base knocks by Jalen Battles [Arkansas] and Ryan Flores. Battles single would score two of the three runs, tying the game at 5-5. The Chanclas were unable to move across the runner in the bottom frame of the 10th after a fielder’s choice, strikeout, and a flyout ended the inning. The bottom of the 11th would prove much more fruitful than the last. With a runner on second, LaRue hit a single into the outfield scoring the game-tying run at 6-6.

And then there was Grant Smith, again. Bases loaded, two outs, and on the second pitch, Grant Smith hits a hot shot up the middle which scored the walk-off run. Grant himself would account for 3 RIBs on a .500 night at the plate.

The pitching of the Flying Chanclas has seen better games. However, after the 4 runs put up in the 3rd inning by the Generals, the pitching staff would only give up 1 more run in what would be an 11 inning game. The offense saw its fair share of struggles early on, scoring only 2 in the first 8 innings. However, the bats came alive in the 8th when the club scored 5 over the next three innings. Clutch hitting for the Chanclas saved the day. Jalen Battles, Tyler LaRue, and Grant Smith all had game-tying or game-winning RBIs. The Flying Chanclas de San Antonio pulled out an extra-innings win thrillingly by a score of 7-6.