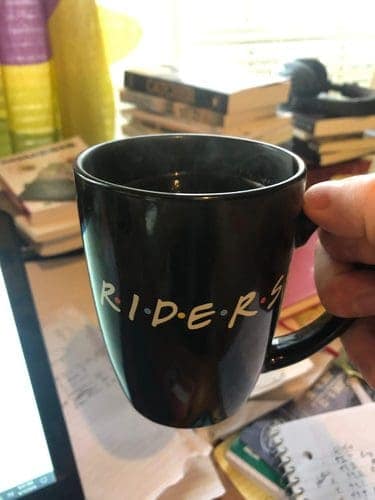 There were a few questions lingering around Dr. Pepper Park Friday night.

How would Joe Palumbo respond with a return to Frisco after a Major League debut? Would anyone produce hits and runs? Would the bullpen respond after some heavy use? ?How would the team hit the field in the midst of seven-game losing streak and being outscored 40-10 in that span?

What about losing first place in the Texas League South division after holding that spot since near the start of the season. What about all the noise around the big club?s surprise season in which they currently hold a playoff spot here nearly mid-June?

Riding a lineup that looked pulled from a hat, the Roughriders responded in all the ways you want to see in a young farm system that wants to win.

Palumbo?s start was short, but solid and effective. ?Building on his base of high-spin fast balls mixed with a sharp curve and the work-in-progress changeup, he delivered another performance that shows he will be a big league regular in time. ?The line is crisp: 48 pitches in 3 innings of work. 2 hits (back to back singles in the first). No runs. 4 strikeouts and 1 walk. Not surprising 3 K?s on swings and misses on FB?s up, and one on a swing and miss CB. ?One of the hits was on a changeup in the middle of the zone. I think the command of the changeup down is a work in progress. And I would argue one of the most difficult to master. In my scattered charting I tracked 8 changeups of the 48 pitches.

There is a lot of talk about Palumbo moving back to the big club as soon as next week. ?I am no scout at all but, personally I am mixed. I think that most starting pitchers need a repertoire of at least 3 mastered pitches. ?I think Palumbo has 2 with a 3rd on the way.

The big leagues are obviously a whole new level of hitting. ?

But no one pays me to make the decision. I just think finishing this season in Frisco or Nashville would give the Rangers a solid rotation spot in 2020. ?I think the decision will be if the team feels that the repertoire can survive some development mistakes against big league lineups. Tough call as they wrestle with the ?build or compete? question in this surprising season.

The bats finally arrived in Frisco led by Alex Kowalczyk who was 3-4 with a HR. ?Juremi Profar and Preston Beck also homered. Other hits came from Josh Altmann, Chuck LeBlanc, Brendan Davis, and Christian Lopes. ?After scoring one run or less in four of the last seven, the whole team looked ready to hit.

To round out a solid team performance, the bullpen was masterful. ?With Palumbo going just the 3 innings, the depth of the bullpen emerged with 4 solid performances led by Blake Bass and newcomer DeMarcus Evans, with Matt Bush and James Jones contributing.

In seven of the last eight innings, the pitchers faced the minimum of 3 hitters.?

Bass hit a batter with his first pitch. Then promptly induced a double-play and mowed through the next 4 batters to face the minimum 6 batters in his 2 innings of work, finishing it off with a strikeout to end the 5th.?

Evans followed with 2 innings of worked marred only by a HR on a 3rd consecutive CB that maybe should have hit the dirt. ?But that?s what development is all about! Another high spin rate dude whose FB sits around 92-94 but touched 96 and then 95 on his 29 and 30th (last 2) pitches.??

Bush completed the 8th easily, and James Jones closed it out for the Riders by inducing the third double play of the night after a walk and a nice CB to finish the night with strikeout and Riders win.?

For me the night was about perspectives. I was fortunate enough to enjoy much of the game in the press box with access to some stats and other observers of the game. ?So it was in a very real sense a totally new perspective for me to watch a game from the press box.

I was so intrigued by the stats I spent most of the night after the game reading up on spin rates. ?I know for a fact I can pretty much fake my way through an explanation of the Magnus effect at this point. ?There is a lot of talk about spin rates these days. And you can see why. The data we have at this point shows that higher spin rates lead to more swings and misses and more ineffective contact at the plate. ?But a dive in the Driveline Baseball website research page will lead you into a variety of variously dense readings about the effect spin rates. And we discover there is more to discover. Spin rate alone does not tell us everything. ?There are other effects at work (transverse spin) that cannot be measured with radar but will be measured soon with coming technology. I, for one, applaud the new statistics and research.

I always have that feeling that many things come full circle. ?As we begin to analyze every motion of the body and ball on every pitch, we will come to realize that there are many ways to pitch effectively in baseball. ?The key will be to find the way that works best for each individual pitcher and maximize those effects, if the players are willing.?

My wild hare consideration is that perhaps the increase in injuries has more to do with parents and coaches forcing young players into pre-determined models of pitching along with overuse. ?Technology and statistics are not the cause of anything, they are the tools and measures of the outcomes we produce. They only tell us what is happening.

My Friday started with Roughriders questions and as I sat around with my Saturday coffee, I have more questions about the game itself and its changing nature. ?I find it an exciting time to be around baseball. Players are better than ever. Witnessing the game is better than ever. It is amazing to see its development. ?Just like young pitchers like Joe Palumbo and DeMarcus Evans.