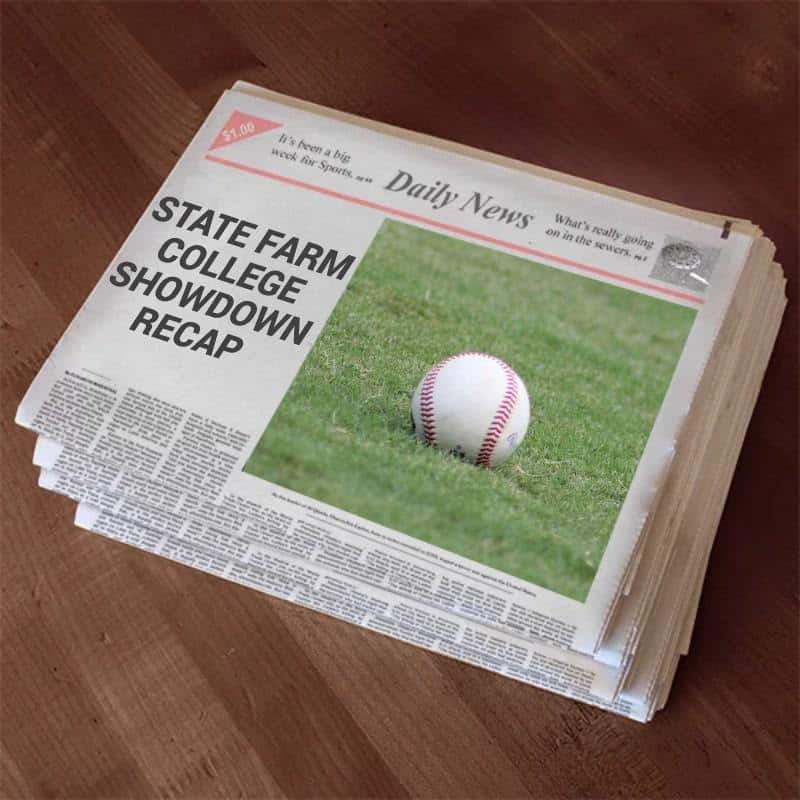 Just as Texas is thawing out, the 2021 College Baseball season started with the State Farm College Showdown. It sure is good to hear the sound of the ball hit the glove and bats.

Here is the State Farm College Showdown recap for day one.

The Texas Longhorns 9 lost the opener to Mississippi Bulldogs 7 by a final of 8-3.

The pitching staff for the Bulldogs dominated against the Longhorns. Don’t go writing them into the College World Series just yet but it was a heck of a performance.

Each starter pitched four innings before being relieved.

Christian MacLeod started for the Bulldogs and pitched four innings, allowing one run on 6 hits, including a home run. He struck out 7 batters.

Landon Sims made his presence known on the mound. He was brilliant in relief for the Bulldogs and was throwing the heat. He struck out 10 of the 12 batters faced in his four innings and earned the win.

The Bulldogs started the scoring in the top of the 2nd inning on a single by Lyles which scored Hancock. Then McGowan singled which scored Dubrule, making it 2-0. The Bulldogs never gave up the lead.

Luke Hancock homered in the 4th to give the Bulldogs a 4-0 lead at the time.

The Longhorns didn’t get on the scoreboard until the bottom of the 5th when Melendez hit a solo-shot to left field.

By the 6th inning the Bulldogs were leading 6-1.

Rowdey Jordan got a little rowdy in the top of the 8th. He hit a solo shot, a no doubter to make it 7-1. Hatcher followed up with an RBI double making it 8-1.

The Longhorns attempted a comeback in the bottom of the 9th with a double by Ivan Melendez that scored Douglas Hodo. Catcher, Silas Ardoin singled up the middle which brought around Melendez making it 8-3. The final out was by Tod’s who popped out to 2nd.

Defensively, the Longhorns committed two errors. One by their shortstop, Faltine and the other by third baseman Williams.

The Bulldogs, Landon Sims (1-0) pitched 4 innings without allowing a hit or giving up a walk while striking out 10 or the 12 batters he faced.

The Longhorns struckout 18 times as a team.

The Rebels won their 17th consecutive game going back to 2020 with their 7-3 win over the Horned Frogs.

Left-handed pitcher Doug Nikhazy started for Ole Miss. He was relieved in the bottom of the 2nd by left-hander Jackson Kimbrell after he walked in three runs.

Right-hander Taylor Broadway pitched four scoreless innings for Ole Miss allowing only one hit while striking out five and earning his first save of the season.

Ole Miss was the first on the board. They scored four runs in the top of the 2nd inning.

TCU scored three runs in the bottom of the 2nd making it 4-3. All came on bases-loaded walks. Neither team scored again until Ole Miss put another two runs on the board in the top of the 7th.

TCU threatened in the bottom of the 6th with two on and no outs after a single and a walk. Right hander Taylor Broadway releived Drew McDaniel on the mound for Ole Miss.

Ben Van Cleve, the designated hitter Ole Miss at the plate, going 2-for-3 with a double and two RBIs.

Rebels Catcher, Hayden Dunhurst blocked a pitch and threw it to 1st for a pick-off in the bottom of the 3rd.

There were three umpire reviews. One was a hit-by-pitch. After the review, they called a ball initially since the batter went toward the plate. After another conference, the umpire called him out for interfering with the pitch according to the broadcast.

Arkansas used six pitchers in this game. As a staff they allowed 9 runs on 9 hits, 7 walks and 10 strikeouts. They had 2 wild pitches and hit two batters.

The Texas Tech Raiders used a total of seven pitchers and as a staff allowed 13 runs, 11 hits, 11 walks and struck out 14. Not only did the walks not do them any favors but they had 6 wild pitches and hit one batter.

This game started off scoreless until the 5th inning. The Razorbacks drew first blood.

The game was tied at 5-5 until the bottom of the 6th when Tech scored a run making it 6-5 but that lead changed in the top of the 7th. A balk tied the game at 6. Then 2 runs scored on a wild pitch. The throw to the plate got away from the pitcher which allowed the two runs to score. 8-6 Razorbacks.

In the bottom of the 7th, the Razorbacks gave up the lead. Trest was brought in and gave up a three-run home run to Fulford who deposited the ball in left field about a few rows back. 9-8 Texas Tech.

Fast-forward to the top of the 9th and the lead changes. Battles hit a single to tie the game at 9. A passed ball allowed the Razorbacks to take the lead.

Christian Franklin thought he had a home run but it turned into an out by the centerfield wall.

For anyone wondering the attendance was reported to be 16,908.