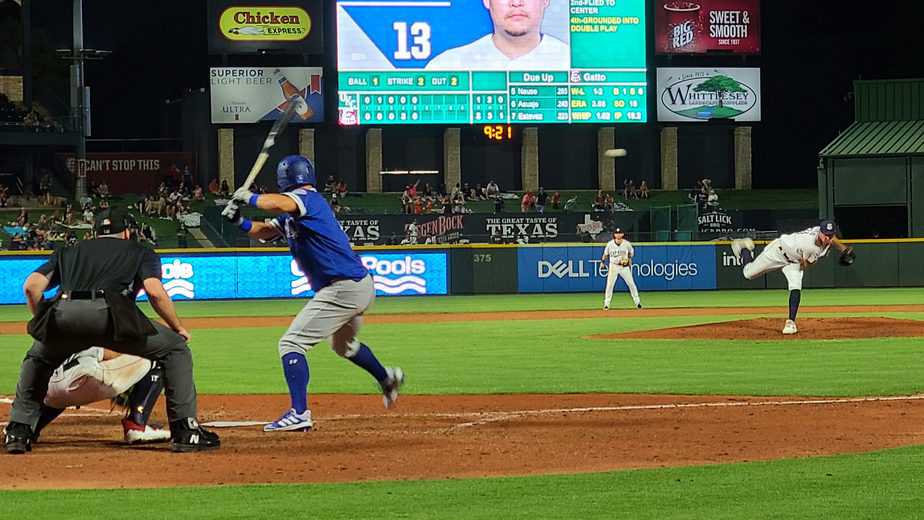 Round Rock, TX – Four Express pitchers combined to hold the Oklahoma City Dodgers to 2 hits while the offense, powered by solo home runs from both Delino DeShields (5) and Yohel Pozo (18), helped Round Rock to a well deserved 3-1 win in front of 5,304 Thursday night at Dell Diamond.

Collin Wiles (3-1) got the start and the win going 5 innings of 2 hit/1 run ball while striking out 3 and walking one. Three Express pitchers held the Dodgers hitless over four innings of work, capped off by Jake Lemoine’s first save of 2021.

Down 1-0 in the bottom of the fourth, Express DH Delino DeShields got the scoring started for Round Rock by leading off the inning with a solo shot, his 5th to tie the game. The Express would later load the bases with nobody out in the inning only to push just one run across on a Elier Hernandez groundout, to give Round Rock a 2-1 lead.

Yohel Pozo provided the insurance run in the bottom of the 8th, on his team leading 18th homer of the season to cap a 3-4 night at the plate. Pozo currently leads all of Triple-A in hitting with a .354 batting average.

Dodger starter and Fort Worth native Aaron Wilkerson (6-4) started and took the loss despite allowing only 2 runs on 3 hits in his 5 innings of work. Nine of Wilkerson’s 15 recorded outs came by strikeout.

The win, just Round Rock’s third in their last 20 home games, improved the Express to 36-37 on the season while OKC drops to 37-36. Round Rock remains in third place in the (still unstably named) Triple-A West East, 6.5 games behind the Skeeters who beat El Paso 4-3 in 10 innings Thursday at Sugar Land. The Dodgers remain in second, dropping to 5.5 back. The victory gives Round Rock a 7-6 advantage on the season’s Red Dirt Rivalry, with all 13 games of the series having been played at Dell Diamond.

Game 2 of the series comes Friday night at Dell Diamond with a rapidly improving RHP Drew Anderson (4-4, 3.15) making what could be one of his final starts in an Express uniform, taking the hill for Round Rock. Vidal Nuno (2-0, 7.85) will get the start for Oklahoma City. First pitch is scheduled for 7:05. Those planning on going may consider getting in early as there is a bobblehead giveaway in recognition of three-time medal winning softball champion Cat Osterman.

Round Rock Express RHP Ryder Ryan (1-4, 6.17) made an appearance Friday morning for the USA Olympic team and had a solid outing for Team USA. Ryan pitched the 9th inning of Team USA’s 8-1 win against Team Israel in their opener in Pool play. The North Carolina native allowed one hit and struck out two, including the game clincher to 2006 Philadelphia Phillies draft pick Zach Penprase. Team USA will take on South Korea Saturday at 5 a.m. Texas time.

Former Texas Ranger and Round Rock Express righty Neftali Feliz (3-2, 4 Sv, 2.01 ERA), signed to a minor league contract by the Los Angeles Dodgers on July 5th and assigned to Oklahoma City is expected to pitch a couple of times this series. E-Train fan favorite Feliz has been solid in his 7 appearances, striking out 15 over the course of 8 innings since being DFA’d by the Phillies and declining their outright assignment to Lehigh Valley July 3rd.

Be sure to follow The Prospect Times for full analysis.

(as always, some are edited, some are not, but most of the originals are there)