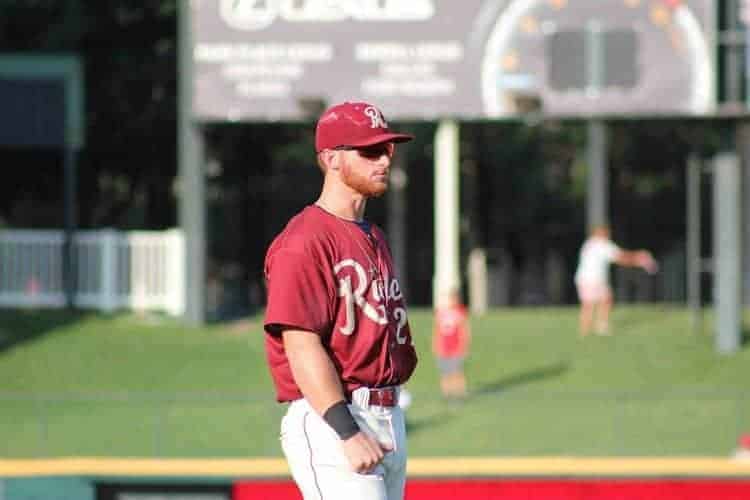 Ryan Dorow started playing ball at age four and has played for 20 years now. He grew up a Red Sox fan, a tradition he carried on from his grandfather.

Dorow was drafted in the 30th round in 2017 from Adrian College. He’s a transplant from Michigan to Texas but finds a lot of similarities in the two states. He loves how clean Texas is and has his bow here to use in his time off.

GS: Tell the fans something that no one else knows about you.

RD: I like to be in the outdoors. Hunting or fishing that is what my off season is packed full of.

His game day routine is fairly simple. He gets to the park about 1:00pm-1:30pm and has lunch. He spends most of the afternoon in the batting cages.

GS: When I talk to people in the know for the organization about defense, your name always comes up as one of the best gloves in the Rangers farm system for any position. What do you focus on defensively that makes you so successful in the field?

RD: I don’t think that there is anything that sticks out honestly. I think the more important thing to being a successful defensive player is the daily preparation. Without that I think it?s hard to sustain defensive production. Preparation is key.

Dorow doesn’t have a pregame playlist but does enjoy country music, including Darius Rucker. He isn’t really superstitious, but does have a Red Bull before every game.

Dorow lacks superstition to the level that he didn’t even pick his new walk-up song. It was changed on his birthday, August 22, by a teammate and was a complete surprise to him when he came up to bat. It ended up being ‘Houston, We Have a Problem’ by Luke Combs.

He says the biggest surprise he’s had since starting pro ball was all the young talent. Getting drafted out of college at age 22, he had 17 and 18 year old teammates who had tremendous talent.

On his days off, Dorow says that after all the traveling he does he mostly likes to just chill. He counts his father and his fiancee as his biggest fans.

While when he was younger he once stated his goal after baseball was to become an athletic director, he doesn’t see himself in that role so much anymore. He states he would leave that window open, but now sees himself more getting into coaching.

When asked what he would say to a younger player out there who dreams of doing what he does, his advice it to simple work hard. Though he says it can be clich?, the biggest thing is to work hard.

Good luck next season, Ryan Dorow! We look forward to covering your time with the Rangers!

Note: I experienced equipment failure when recording my interview and had to base this article off my written notes. My apologies to Ryan Dorow.