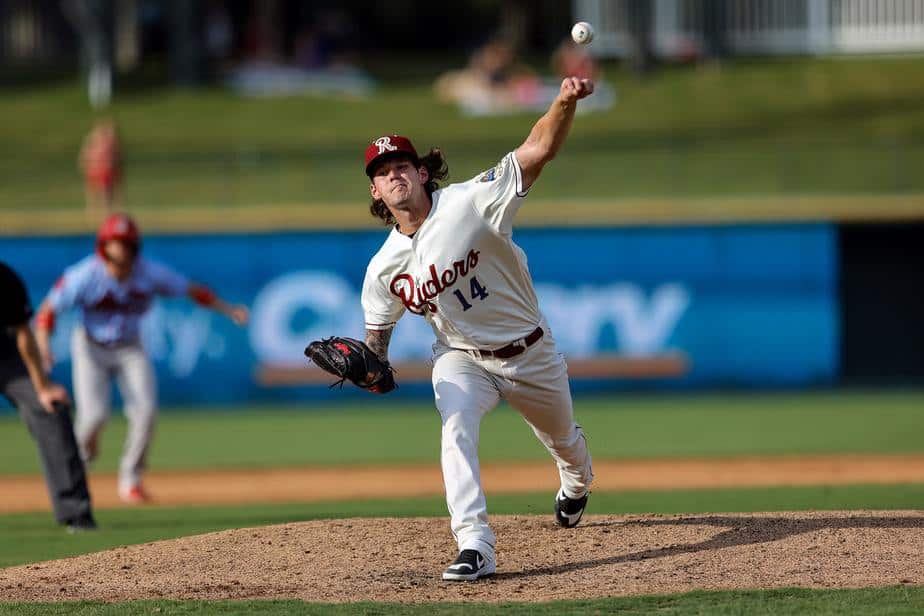 On a 95 degree night: 5,103 fans were in attendance to see Cole Ragans make his 4th start of the season for the Frisco RoughRiders. Those who stayed until the end saw the RoughRiders down to their final out and Diosbel Arias hit a bases-loaded single to bring in two-runs for the RoughRiders 6th walk-off of the season.

It was a much-needed win to bring the RoughRiders back into the win column and split the series 3-3 with the Sod Poodles.

Here’s a few highlights of how it played out.

Left-hander, Cole Ragans made his 4th start in a RoughRiders uniform. He had a 1-2-3 inning in the top of the 1st on nine pitches and had one strikeout.

He gave up a 428 foot HR to Buddy Kennedy (8) in the top of the 2nd but settled down after that ro retire the next three batters with two groundouts and a strikeout.

Things went a little rough in the top of the 4th. The inning was prolonged by a couple of errors, one by Anderson Tejeda and the other by second baseman Jax Biggers. The Sod Poodles scored six runs; three of those unearned.

Grant Anderson (4.26) was the first one out of the bullpen. He pitched a scoreless 5th inning, walking one and striking out one.

Chase Lee, (6th rd pick 2021) pitched two scoreless innings. He gave up one hit, walked one and struckout two three. His earned run average sits at 3.38 after 2.2 total innings since being promoted to Frisco.

Blaine Crim (3-4, 1 R, 1 RBI, 1 BB) got the scoring started for the RoughRiders in the bottom of the 1st with an RBI single. Sam Huff then singled to bring in another run. Diosbel Arias later hit a double to bring in the 3rd run of the inning. The RoughRiders had 4 hits, a walk and a stolen base.

The RoughRiders would not score again until the bottom of the 6th when they were down 7-3.

Anderson Tejeda (1-4, HR, R, RBI, BB, SO) hit a solo-shot to left field. He’s hit a home run two games in a row. One from the left side of the plate and the other from the right.

In the bottom of the 7th, Sam Huff demolished another ball but this one only went 441 feet. It brought the RoughRiders to within one run 7-6.

In the bottom of the 9th the RoughRiders had the bases loaded with two outs. Josh Stowers drew a walk with one out. Blaine Crim, then singled. Sam Huff struckout. Anderson Tejeda, who is known for aggressively swinging drew a walk. Then Diosbel Arias delivered the knockout blow to end the game. He hit a 2-1 pitch into center to score both Stowers and pinch-runner Miguel Aparicio to end the game and give the RoughRiders their 6th walk-off of the season.

The RoughRiders move to 50-34 and become the first team in the Double-A Central to win 50 games.

Starting on Tuesday August the 10th the RoughRiders start a six-game series with the Northwest Arkansas Naturals.