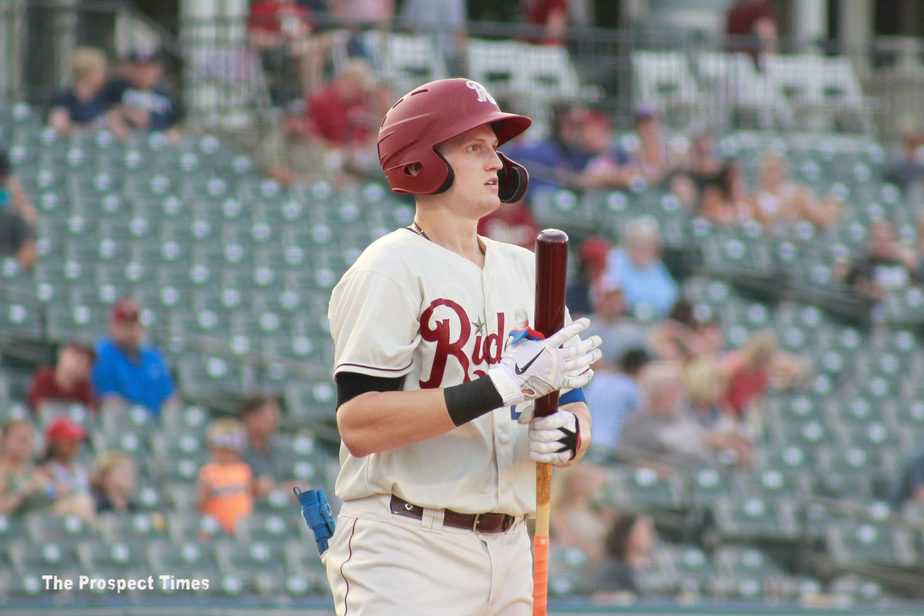 Frisco, TX – There it is, the power of Sam Huff. A crowd of 3,583 was on hand to witness the Frisco RoughRiders lose in 10 innings 7-6 to the Springfield Cardinals, the Double-A affiliate of the St Louis Cardinals. They also saw the mammoth home run that Sam Huff hit that they will never forget. It traveled 495 feet and exited off the bat at 111 mph. I dont know if I will ever see another ball hit in that spot or that far in a game. The home run was his 1st of the season. Here’s a recap of the game starting on the mound.

Left-hander Jake Latz (5.03) took the mound for the RoughRiders. He hit up to 92 MPH on the radar on the fastball. During his 5 innings he allowed four runs on six hits, including a home run. He hit a batter, walked three and struckout seven.

Stephen Villines (1.87) has been solid coming out of the pin and he’s got an interesting side arm delivery. He hit up to 86 mph from what I saw while in the box. He struckout two.

Nick Snyder will probably be in a Rangers uniform by the end of this season. He pitched two innings and although a run scored, it didn’t count against him since it was in extras with the extra innings runner on 2nd. He lowered his ERA to 0.79 and hit up to 99 mph. He struckout threw, all swinging.

Have I mentioned that Sam Huff obliterated a baseball and sent it flying 495 to center field? He actually didn’t get the scoring started for Frisco but he gave the Riders the lead at the time with his 2-run home run in the bottom of the 3rd.

The Riders first run came from a balk which scored Sam Huff in the bottom of the 2nd inning. Diosbel Arias then knotted things up at 2-2 with an RBI single to left-field.

The Riders scored again in the bottom of the 4th inning thanks to a Josh Stowers sac-fly to center.

Steele Walker hit his 9th home run of the season to tie the game at 6-6 in the bottom of the 8th.

Defensively, the RoughRiders played a clean game. There was a really nice stop by Anderson Tejeda where he made a full-extended diving stop and threw to 1st in enough time to get the out in the top of the 10th.

The Riders lost the game 7-6 in 10 innings and move to 38-24 on the season and are still in first place with a 7-game lead. The Cardinals move to 23-39, 11 games back from the 1st place Wichita Wind Surge in the Double-A Central North.

I was hoping for a walk-off for the 2nd straight game. Unfortunately we didn’t get it but we saw a seldom hit 495 foot home run. That’s something I’ll be talking about forever.