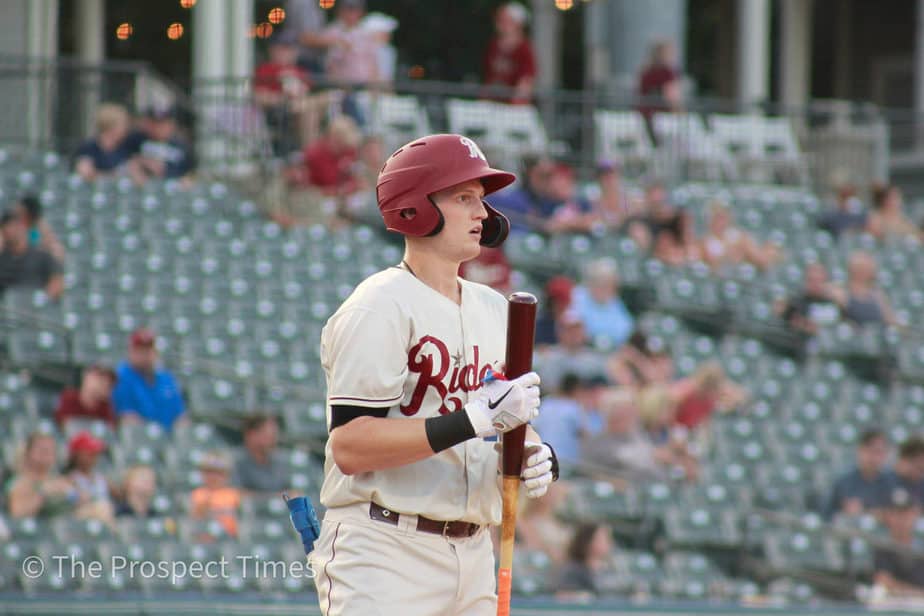 Sam Huff powered the RoughRiders to an 8-1 win over the Arkansas Travelers. Quite literally. He hit two home runs on the night. His longest blast of the night went 475 feet. His first home run in the bottom of the 5th, only traveled 446 feet which. Since joining the RoughRiders, Huff is the owner of the top 3 furthest home runs by a RoughRider this season.

Ronny Henriquez had a strong outing. He tied his previous season-high with 6 innings pitched. He allowed one run on two hits and struckout six, lowering his earned run average to 4.93.

The bullpen did a fantastic job as a unit. They pitched three innings, allowing one hit and struckout three.

Blake Bass, Hever Bueno and Chase Lee all had a scoreless inning. Chase Lee, the Rangers 6th round pick this year now has a 3.38 earned run average.

I keep mentioning the name but Sam Huff put the RoughRiders on the board in the bottom of the 5th with his 1st of two home runs.

A passed ball by Josh Morgan allowed Josh Stowers to score, which gave the RoughRiders the lead and they never looked back. A throwing error by the Travelers pitcher, David Ellingson, allowed Isaias Quiroz to score. Then Josh Smith hit a single that scored Bubba Thompson. The score was 4-1 Riders.

The RoughRiders scored again in the bottom of the 7th when Isaias Quiroz hit a single that scored Stowers.

Davis Wendzel recovered nicely from his previous 3-error game. He went 1-4 with a two-run homer to pad the lead. The final run for the Riders came from Sam Huff who hit the monster 475-foot shot. Score 8-1.

The RoughRiders get back in the win column and move to 54-39.

Ronny Henriquez gets his 4th win.

Josh Smith, Sam Huff and Isaias Quiroz each had a two-hit game.