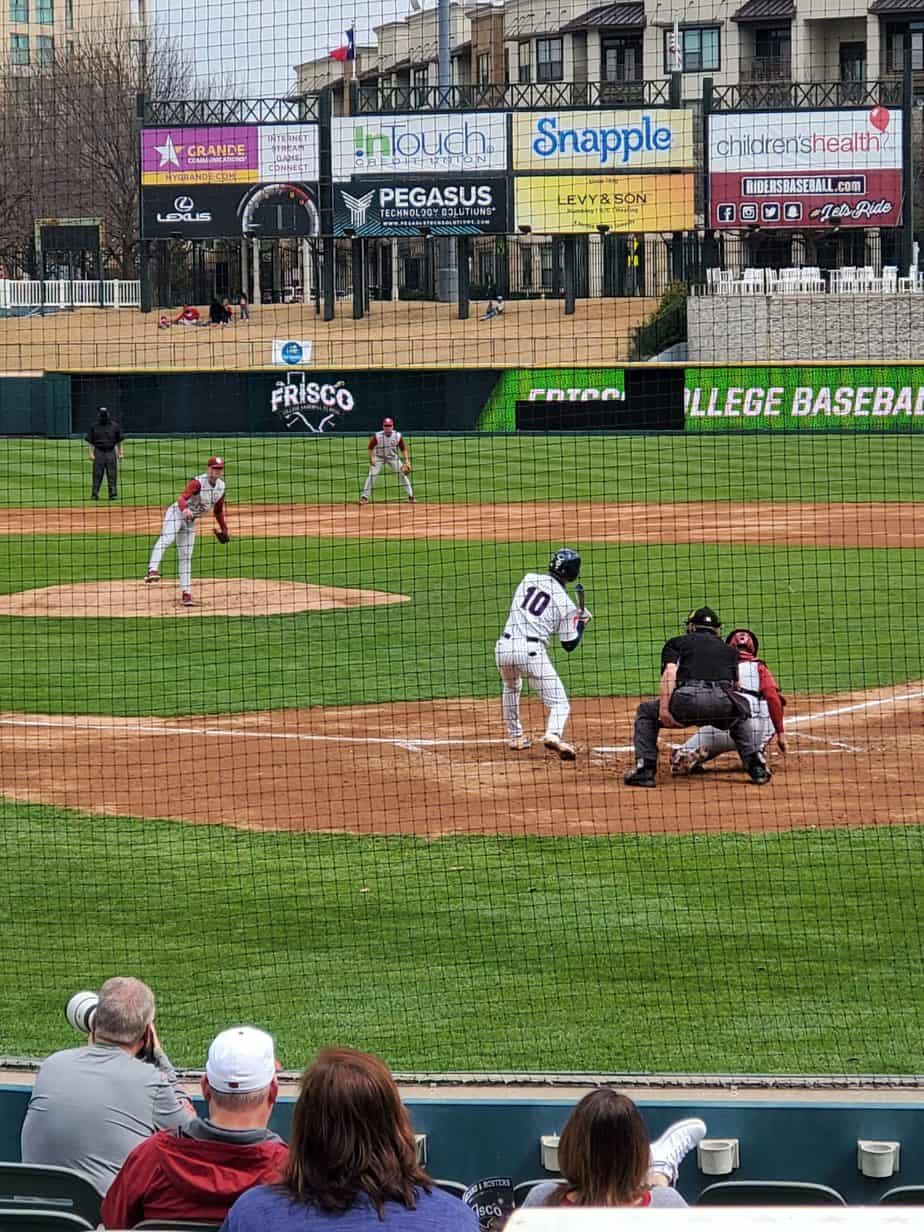 This is the first time I’ve been to a baseball game in a little over a year. The first game today at the Frisco Classic: Arizona vs Oklahoma.

None of the teams featured in the Classic this year are ranked.

It feels so good to be back at Dr Pepper Ballpark. We’ve all missed the sounds of the ball hitting the glove, hearing the bat hit the ball, seeing scouts with their radar guns, eating a hot dog or two or three.

I want to thank Peak Events. If it wasn’t for the Frisco College Baseball Classic; we wouldn’t see baseball here for another two months.

The AA season is set to begin on May 4th

Arizona hit early in this game. They had a 5-0 lead over Oklahoma by the end of the 2nd inning.

On the mound: Sooners

For the Sooners, right-hander, Wyatt Olds started on the mound for the Sooners and Chandler Murphy for the Arizona Wildcats.

Olds gave up 5 runs in the first two innings but settled down to end with a line of: 4 IP, 6 runs allowed on 6 hits and 4 walks.

Aaron Brooks for the Sooners had a nasty breaking pitch that was just missing under the zone. He pitched 2/3 of an inning and allowed 1 hit and 1 walk.

On the mound: Wildcats

Chandler Murphy started really strong for the Wildcats. He pitched 5 shutout innings until he gave up the lone run in the top of the 6th. He allowed one run on 8 hits and 1 walk.

Preston Price entered the game with the bases loaded and he proceeded to strikeout all 3 batters.

Riley Cooper and Austin Smith each pitched a scoreless inning.

Jacob Blas started things off with a home run to left center field in the bottom of the 1st. Bases loaded and then a couple of walks were issued to bring in two more runs for the Wildcats. 3-0 Wildcats.

There where several other Wildcats that had a multi-hit game. Danta’ William, Branden Boissere, Jacob Berry each had two hits. They scored 11 runs on 11 hits and 7 walks. They had a big inning in the bottom of the 6th scoring 5 runs.

The Sooners managed 8 hits but were only able to bring in 1 run. Peyton Graham, Tyler Hardman and Tanner Tredaway each had two-hit games. Jimmy Crooks had the lone RBI for the Sooners. He went 1 for 4 at the plate. Connor McKenna was the only batter that worked a walk against the Wildcats pitching staff.

One play caught my eye, it was Left-fielder, Mac Bingham had a nice diving catch in the top of the 5th.

That’s ballgame. Final 12-1 Arizona Wildcats. The Wildcats move to 8-2 on the season and looked really good today. The Oklahoma Sooners move to 4-5 on the young season.