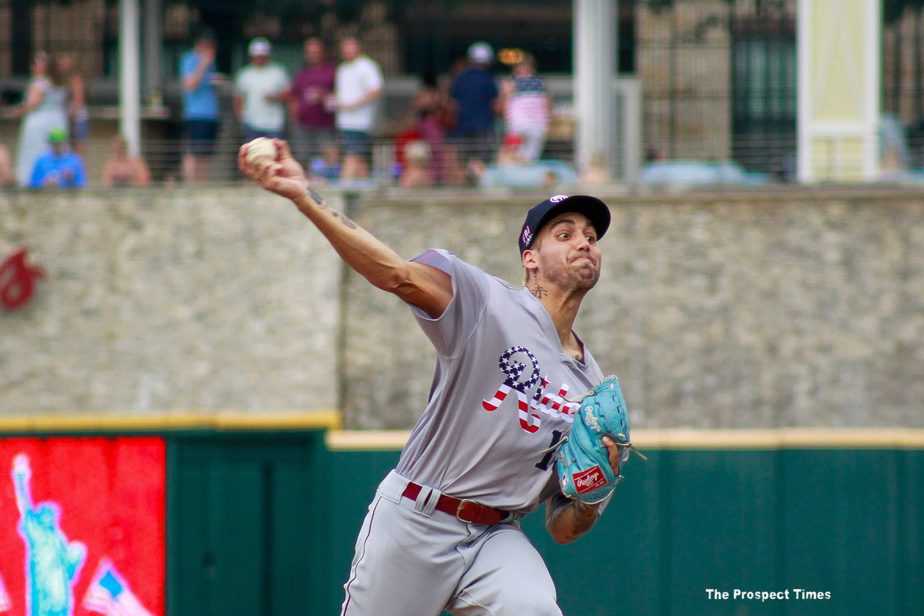 RoughRiders fans filled the seats, packed the berms and the Lazy River at Riders Field. It was largest crowd of the season. A crowd of 7,610 to be exact. The RoughRiders expect to see another big crowd tomorrow.

The right-hander was hitting up to 95 MPH from what I saw.

Hans had it cruising tonight. Crouse lost his perfect-game in the top of the 4th when he walked SS Nick Allen on 4 pitches. He ended up losing his no-hit bid in the top of the 6th that the crowd wasn’t happy about. Many thought the hit should have been ruled an error as it got by Hoover who then seemed to defer it to Tejeda and it rolled through. The official scorer ruled it as a hit as no one touched the ball.

Crouse ended the night pitching 5.2 innings. He only allowed the contested hit and issued one walk. He struckout seven RockHounds.

Blake Bass (3.00) replaced Hans Crouse, who got a nice ovation from the crowd. Bass didn’t have his best stuff working tonight. His first pitch was a wild one which allowed the inherited runner to asvance to 2nd but he still didn’t allow a run. He pitched 2/3 of an inning, allowing 1 hit.

Cole Uvila (2.05) is going to pitch in the Majors sooner rather than later. He was asked to get two big outs in a scoreless game with a runner on 2nd. Cole Uvila answered with 1.2 scoreless innings. He threw 35 pitches/25 for strikes, allowed two hits and struckout four. He hit up to 95 MPH on the gun and his off-speed as low as 83. Let me just say Cole Uvila’s spin-rate is fantastic.

Nick Snyder (1.42) is another that will pitch in the Majors. His fastball was popping the catchers mitt up to 101 MPH. He hit 100 at least a few times. He threw 11 pitches/ 7 for strikes and struckout one during his process of shutting things down for the RoughRiders.

All of the RoughRiders scoring was done in the bottom of the 7th. They had 9 batters come up to the plate, just one away from turning over the line-up.

Steele Walker started the bottom of the 7th with a fly-out to center. Josh Stowers drew a walk. Diosbel Arias then hit a single moving Stowers to 3rd. Anderson Tejeda laid down a perfect sacrifice bunt that scored Stowers and moved Arias to 2nd. Score 1-0 Riders. 2 outs.

Catcher, Jordan Procyshen does it all. He catches, pitches and adds insurance runs. He laced a single to left field and it brought home Arias. Riders lead 2-0.

Bubba Thompson was up next and he hit a huge two-run double that came off his bat at 105 MPH. JP Martinez struck out swinging for the 3rd out. They scored 4 runs with two outs.