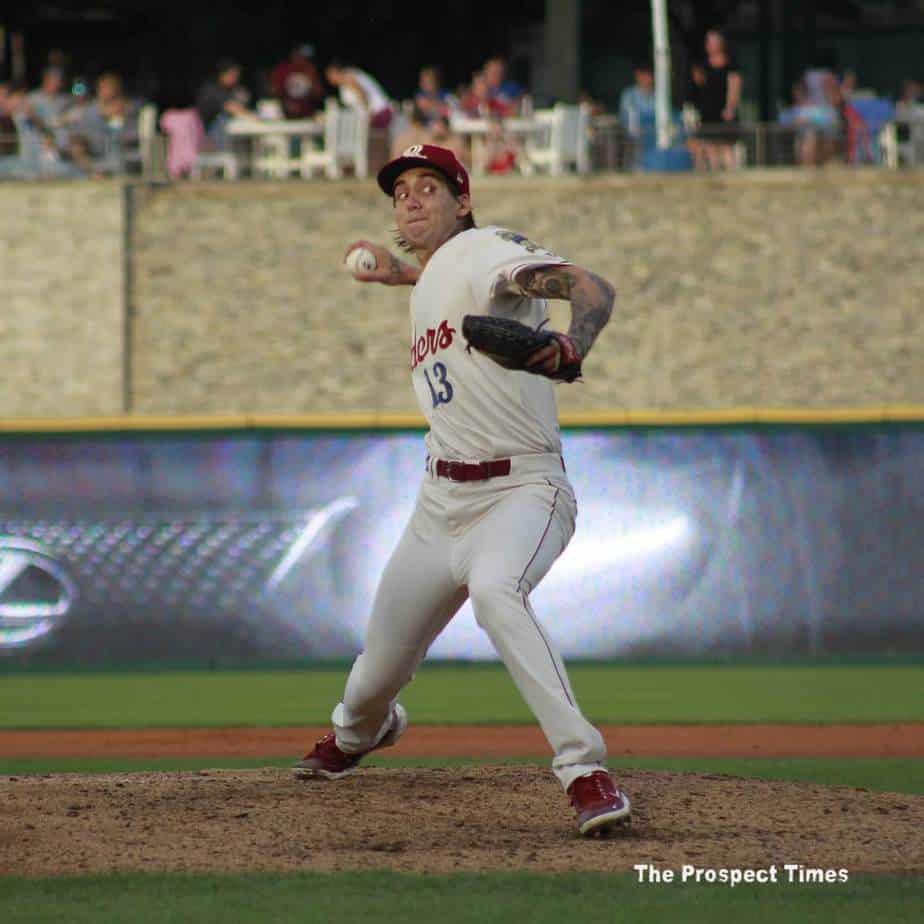 Hans Crouse, the right-hander who’s ranked as one of the Rangers top pitching prospects, took the mound in Frisco for the first time last night.

I would have guessed he would have pitched four innings since he’s pitched an extra inning in each of his first three starts. He pitched three innings in his last start against the Midland RockHounds and allowed his first run at the plate.

The RoughRiders came into this game with a 17-9 record. Now they’ve got a 17-10 record and have a half a game lead on the Midland RockHounds for 1st place in the Double-A Central Division.

The pitcher for the Sod Poodles was right-hander Ryan Weiss (2-1, 3.64) who was the pitcher of record earning the win.

The RoughRiders lost by a final of 6-3 and Hans Crouse (0-1, 2.00) was tagged with the loss, his first of the year. He’s pitched 9 strong innings between his four starts.

Crouse hit up to 95 on his fastball from what I saw. He pitched three innings, allowed one run on the home run to left-fielder Jake McCarthy (.244) in the top of the 1st. McCarthy ended up going 3-5 at the plate with the home run and three RBI.

In total Crouse allowed one run on two hits, one walk and four strikeouts. Not a bad start. He threw 56 pitches, 36 for strikes.

Here are a few additional pictures from the game yesterday.

The RoughRiders have been kind of lethargic at the plate of late. They did get a couple of home runs in this game. Josh Stowers (.122)and Steele Walker (.207) each hit a home run in the bottom of the 4th. For Stowers it was his 2nd of the season and for Steele, it was his team-leading 5th home run.

As a team the RoughRiders are slashing a line of .222/.313/.349/.662. Something that needs improving as the season moves on. They need Bubba Thompson and Davis Wendzel back in the line-up, though we are still about 5 weeks away from seeing Wendzel.

The RoughRiders pitching staff has been amazing and you could say that they have carried the team. The Riders will look to get back into the win column tonight.

Missed bats and broken bats: story of the two Cole’s