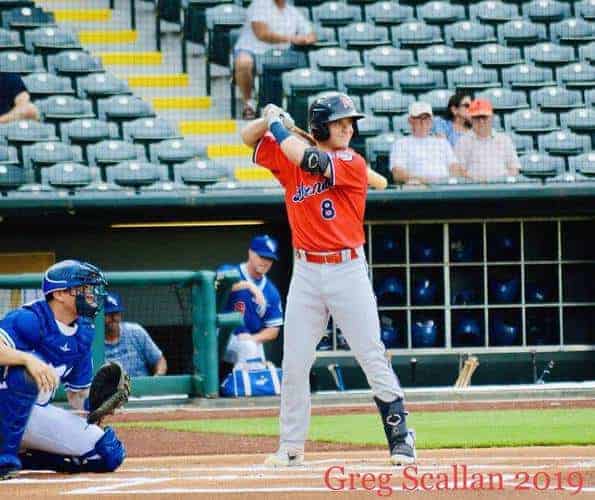 Nick Solak, 24, is someone that alot of Ranger fans are excited about and it’s for good reason. Solak was acquired by the Rangers when they sent Peter Fairbanks (Pete from Accounting) to the Tampa Bay Rays.

In 30 games with the Nashville Sounds, Solak has been fantastic. Enough so that some Ranger fans are calling for the benching of Odor in favor of Solak. I’m personally not quite there myself but I understand the frustration. Just imagine how Odor must feel with his struggles at the plate this year.

Greg Scallan is covering the Nashville Sounds while they are in Oklahoma City playing the Oklahoma City Dodgers (Dodgers). He was able to get a quote from the Sounds hitting coach, Howard Johnson.

Well I didn’t do alot with him. Anytime I get new players that come in through the year orientation, the first thing I want to do is watch and what I noticed about Nick is he’s really good at getting the ball up in the zone, that’s his best spot, so I think he’s done a nice job of trying to make pitchers come to that spot and when they do, he makes them pay. He can lay off any down and below the zone, then he gets better pitches to hit. He’s aggressive and he’s got a short stroke, gets on top of the ball very well. I think he’s very much aware of what he does. As a hitter to have success in the big leagues, you’ve got to know what you’re doing. Know yourself, how you’re trying to attack the ball.

Also, a quote from Jeff Hem, the play by play announcer for the Sounds.

I saw a very impressive young hitter, a guy who’s got quick hands, knows the zone, his home run total became pretty eye popping I think because of the number of home runs he had with Durham versus the short stretch with us but I think as much as he does have some power I think the fact that he hits for average is what should be attractive to the Rangers. We’ll see how the power translates at the big league level but he can flat out hit. He holds his own defensively.

~Jeff Hem, play by play announcer for the Sounds

Those are impressive quotes coming from guys who are there seeing Solak play every night.

Solak was the DH in his Debut and went 1 -3. His first big league hit was a single in the bottom of the 7th off of Andrew Heaney.

In game two, Solak played 2nd base and hit his 1st career home run and the score is the 1-0 in the bottom of the 5th as we speak. Welcome to the big leagues Solak!