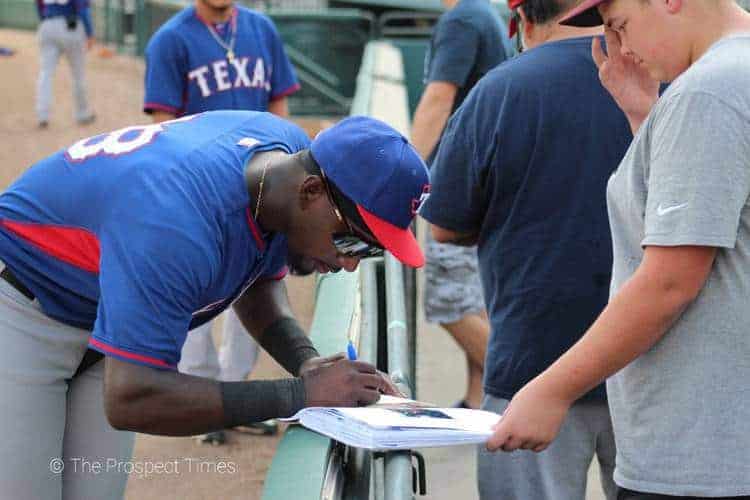 Sherten Apostel made his Major League Debut for the Texas Rangers. Catcher Sam Huff made his debut yesterday. If that doesn’t tell us the Rangers are evaluating for the future, I don’t know what does.

The Rangers just completed a double-header against the AL West leading Oakland Athletics. They won the first by a final of 5-2 and then lost the 2nd by a final of 10-1.

1st game of the double-header

Offensively, all of the Rangers runs were scored in the bottom of the 1st inning. Odor hit a 3-run home run and then Ronald Guzmán hit a 2-run home run. Four of their five hits came in the 1st inning with their last hit of the game coming in the 2nd.

2nd game of the double-header

Kolby Allard (0-6, 8.49) wasn’t able to get an out in the top of the 2nd before he was pulled. It was another rough outing and I have to wonder if he will get another start.

Taylor Hearn replaced Allard and pitched 1 inning. Hearn struck out the side but it wasn’t in order. He allowed 1 run on 1 hit, 2 walks and had 3 strikeouts.

The Oakland Athletics put up 7 runs in the top of the 2nd and basically put the game out of reach, especially for a seven inning game.

Joey Gallo kept the Rangers from being shut out with his 9th home run of the year. That baseball exited in a hurry- literally the blink of an eye.

The big news happened after the 1st game of the double-header. Third baseman Sherten Apostel was called up and shortstop Elvis Andrus was placed on the 10-day IL with his lingering back issue.

Alot of Ranger fans have been calling to see Apostel recently with the Rangers more willing to give their young guys a look. He commited his first error but I don’t really put alot into it as his nerves were probably getting to him and growing pains are expected.

Apostel grounded out in his first at-bat on the 2nd pitch. In his 2nd at-bat, he struck out swinging on the 5th pitch which was a 69 MPH curveball. The most impressive at-bat was the one in the bottom of the 7th. After working a 2-2 count on four pitches, he fouled-off four pitched in a row then hit a 73 MPH curveball into left field for his first Major-League hit of his career. He finished the game going 1-3 with a strikeout.

Sam Huff got his first Major-League hit in the bottom of the 6th.

As a unit the line-up got 10 hits. Taveras, IKF and Gallo each had two hits.

So far, I like what I’m seeing from the young guys and have to say the Rangers future is looking bright.

Willie Calhoun is expected to be activated from the IL on Tuesday.

John Blake reported that Anderson Tejeda was scratched due to a stomach bug.

In case you missed it, here is Marah’s recap from the 10-6 loss to the Athletics on Friday.