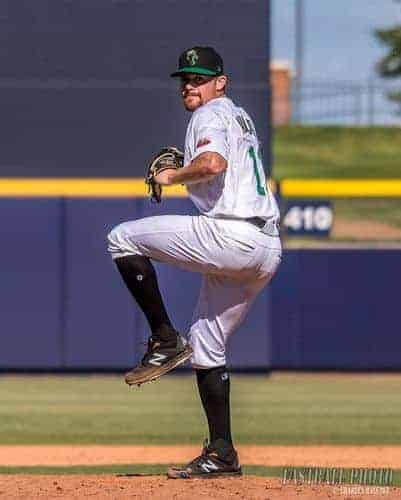 The Texas Rangers farm system is loaded with pitching talent, especially in the lower levels. I’m no scout but I believe they are deeper than most give the Rangers credit for. Joshua Advocate is one of those talented prospects and chances are you’ve heard his name this year.

He is a right-handed pitcher who is listed at 6’0, 195 lbs and will turn 26-years-old in January. The Texas Rangers selected him in the 20th round (614th overall pick) of the 2017 draft from California State University Long Beach.

As mentioned, Josh pitched for California State University Long Beach during the 2016 and 2017 seasons.

2019 Down East and Arizona Fall League

Advocate had a great year in High-A ball with the Down East Wood Ducks (#DEWDs). He had an 2.76 earned run average in a career-high 75 innings pitched.

Prospect Times: Do you prefer Joshua or Josh?

Prospect Times: Where do you call home in the off-season?

Josh Advocate: My wife and I bought a house and live in our home town. It?s a small town called Mohave Valley, Arizona.

Prospect Times: Who has been the biggest influence in your career?

Josh Advocate: It would be the pairing of Mark Ruckle and his son Jake Ruckle. Jake played with the Mets organization. His dad was a D1 linebacker. From the weight room to infield to have the work ethic to get out of a small town they laid the foundation for me to grow.

Prospect Times: How did you get started in baseball?

Josh Advocate: I started playing tee ball around 5 years old. I don?t remember how it all start but I remember always enjoying it. We had some success on our youth teams so I think that helped develop the passion I have for the game.

Prospect Times: What has been the biggest adjustment from high school to college to pro ball?

Josh Advocate: The level of talent has obviously increased, I think that goes without saying. The adjustment from my last year in college to my first year in pro ball was understanding that development is the priority.

Prospect Times: You had a solid year with the DEWDS this year and pitched the most innings you have ever pitched in a season at 75 innings. How did your arm hold up?

Josh Advocate: My arm seemed to feel better and better as I went along. I was throwing harder than I ever had coming down the stretch and that continued into October.

Prospect Times: You pitched in the Arizona fall league and the stats were amazing. You didn’t allow a run in 11 IP, 3 H and were 3-3 in saves. Were you trying anything new?

Josh Advocate: We worked a bit on further developing a changeup but really nothing changed. It was a continuation of the last month of the season with Down East. Becoming more consistent with the breaking ball seemed to really help me in the AFL.

Josh Advocate: It is available and everyone uses it to an extent. Some more than others. I personally feel the analytics have helped me to understand how my stuff plays.

Prospect Times: What is something that people would be surprised to know about you?

Josh Advocate: In the off-season, more of my days start with a 4:30am wake up to do some form of hunting; deer, duck, goose, coyotes, etc than sleeping in. I enjoy hunting so much I continue to shoot my bow during the season.

Prospect Times: Are you working on anything specifically this off-season?

Josh Advocate: The emphasis is really to build a good foundation both in the weight room and through my throwing that I can throw 70+ innings again this year. Being healthy allows me to get more reps, time on the field, and ultimately become better on the mound.

Prospect Times: What is in your repertoire and what is your best pitch?

Josh Advocate: 4 seam fastball, curveball, and changeup. The changeup is a work in progress. My out pitch is my curveball.

From @MohaveShred via Twitter : Do you know how much you have influenced youth baseball in your hometown?

Josh: I feel I have done a good amount in the baseball community back home. I have put on multiple camps, spoke to players, volunteered at the local high school, and do lessons. The biggest impact I feel I can have, though, is to inspire the kids of this small town to chase the dream. It isn’t easy and takes a lot of work but I hope they see me and have the belief they can as well.

Prospect Times: How do you feel about an electronic strike zone?

Josh Advocate: I think the pitcher ultimately benefits but I am not a fan. I think it takes away from the skill of having a good catcher. There is no need to receive pitches well if there is a robot calling balls and strikes.

Prospect Times: What is your favorite home cooked meal?

Josh Advocate: That’s a tough one because I don?t think you can ever go wrong with a nice steak but some home smoked brisket has to take the cake on this one!

We would like to thank Josh for taking the time to answer some questions to help us fans get to know more about him. 2020 is going to be a big year and we will be following along.

With the cancelation of the MiLB season in 2020 Josh didn’t have any official stats. He did participate in the Fall Instructional League.