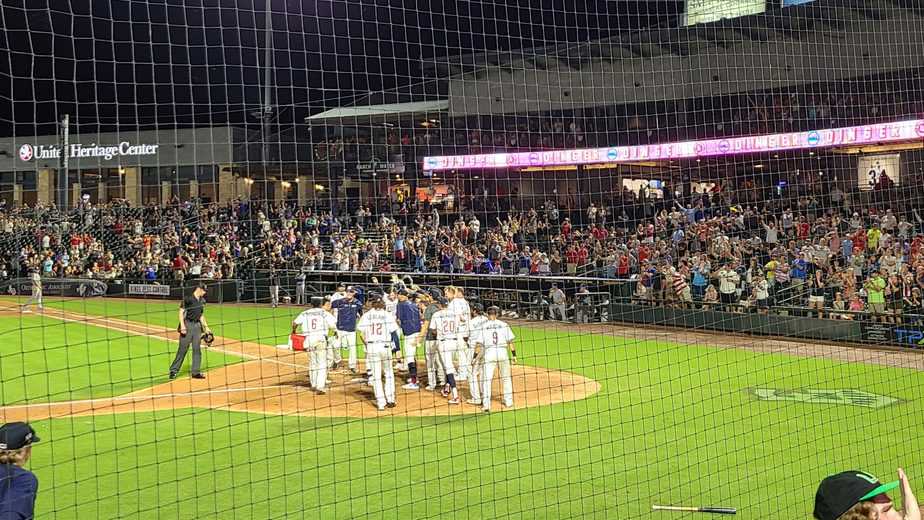 Round Rock, TX – Round Rock catcher Yohel Pozo capped Friday’s 3-4 night at the plate with a 2-out bottom of the ninth home run propelling the Round Rock Express (27-23) to a 3-2 victory over the in-State rival Sugar Land Skeeters (27-22). Pozo’s ninth homer of 2021 provided a prelude to the post-game fireworks in dramatic fashion as the 24 year-old Venezuelan drove a 3-2, 2-out Ronel Blanco fastball to deep left sending the crowd of 7,043 home happy, but not before more fireworks.

With the victory the Express move to within a half game of first place behind the Skeeters in the (still very unstably named) Triple-A West East, while remaining tied for second with OKC. The win evens the season series at seven wins each. With the recent announcement that playoffs will return to Minor League Baseball in 2021, head to head record has been established as the first tie-breaker.

It goes without saying that if your staff only gives up 2 runs a night, you’re going to win more games than not. Getting 4 double plays, multiple highlight reel plays in the outfield and a couple of dazzling snags by Ryan Dorow of errant throws to bail out the aforementioned staff couldn’t hurt either. While the Express find themselves in the middle of the pack on the season in team fielding (although it *seems* worse…at times) Friday night the defense more than did their part and deserves a good chunk of the credit for the win.

Forgotten in the dramatic ending was solid starting pitching as Hyeon-jong Yang (0-0, 2.92) took the bump for the Express. Yang had yet another solid outing but was once again robbed by the “development” nature of the 2021 season. Pulled after four innings and only 66 pitches (41 strikes), Yang finished with a line of 4IP 3H 1R/ER 1BB 5K and was cruising having induced an inning ending double play to kill the troublesome first, then retiring the next (and final) nine in a row. The South Korean was DFA’d and ultimately outrighted by the Rangers June with the hopes he would accept the assignment and work on the control and finesse that propelled him to a .211 BA allowed with a WHIP of 1.13 thru May 19th in Arlington. While Friday did have some moments of wildness and at least one “hit the bull’ Nuke Laloosh moment, by all accounts Yang has done exactly as requested thru each improving start – Friday’s was his third with the Express – it’s unknown what the Rangers plans are for the southpaw as he’s on the wrong side of 30 with over 2000 career innings under his belt while playing for an organization deeply committed to a youth movement. Yang will get a chance to improve on his numbers next week as he’s tentatively scheduled to pitch Thursday at home when the Express take on the last place Albuquerque Isotopes.

In a continuing theme, the bullpen once again dug in allowing only one run over 5 innings of 2-hit ball. Asserting themselves as a team strength of late, the pen has allowed only 4 runs over their last 22.1 innings for a collective 1.61 ERA over that span.

Jharel Cotton (3-0, 4.18) was the first of the pen parade throwing a scoreless 5th inning. Despite the zero on the scoreboard, this was a challenging outing for Cotton. With a final line of 1IP OH 2BB 1K the native of St. Thomas apparently felt the need to test himself as he walked the first batter that he faced. The righty then benefitted from a strike ’em out, throw ’em out double play on an amazing Ryan Dorow grab of the wild Pozo throw to second – that was equally handled superbly by the umpiring crew (for my fellow umpiring junkies). Cotton then promptly walked the next hitter. The 29 year-old righty managed to induce a grounder to end the inning finishing with 22 pitches with only an abysmal nine for strike. In the end, he did his job and put up a scoreless inning.

Luis Ortiz (1-1, 3.98) followed with a page directly from the Jharel Cotton book by allowing the first batter he faced on base, this time via a single from Jake Meyers who was then cut down after Ortiz induced a 6-4-3 double play from Houston native and Longhorn alum CJ Hinojosa, who clearly had early plans for the night, having getting himself ejected after the play. Despite having quelled the threat for the moment, Ortiz promptly let the next hitter Bryan De La Cruz take a 1-0 pitch out of the park to give the Skeeters the 2-1 lead in the 6th. After yet another baserunner allowed, this a Jose Siri walk, Ortiz complicated matters by committing a throwing error on a pickoff putting Siri in scoring position. Ortiz put out the fire with a strikeout of JJ Matijevic to end the inning. Ortiz finished his outing strong with a 1-2-3 seventh (with 2 K’s) to finish with a line of 2IP 2H 1R/ER 1BB 3K 1HR.

Scott Engler (1-0, 8.53 w/RR) took over in the 8th, looking to improve upon his recent challenges of late, having been scored upon in 4 of his 5 previous outings, came away relatively unscathed despite issuing the final 2 of the 6 total walks issued by Round Rock pitching on the night. The 24 year-old righty struck out one despite only throwing a pedestrian 10 of his 19 pitches for strike.

Ironically, Friday’s winning pitcher wasn’t just the most non-descript, but Herget also showed what happens when you throw strikes. Giving the Express the much needed boost Engler came out firing 11 of his 14 pitches for strike completing the scoreless inning with a strikeout to keep the Round Rock hopes alive.

Offensively, Friday night just felt like a continuation of Thursday, as the Express garnered only 6 total hits, all from the 3-4-5 slots (6 for 12) with three alone coming from the star of the game, Yohel Pozo. Friday’s game, like Thursday featured light hitting, wasted at bats and an inability to get the timely hit. Every detail down to a 4th inning run scored by wild pitch was matched. The E-Train went 0-4 with RiSP bringing their total to 15-74 (.203) in those situations over their last 7 games.

The 2nd offensive star, according to the box score, was Curtis Terry (.322/.391/.621) who went 2-4 but what the box score doesn’t show was the professional approach he had at the plate as both of his hits (singles) were 2-strike hits, taken to right field AND against the shift. If the right handed power hitting DH/1B, currently 7th in the league in OPS (1.012), can continue to hit to all fields and maybe get on base just a bit more, the Rangers #26 prospect could not only see his stock rise, but possibly find a permanent home in Arlington, despite being a defensive liability (or DH only). After not protecting Terry on the 40 man each of the past 2 years, a decision will have to be made on Terry one way or the other in the near future.

Utility infielder Ryan Dorow (.262/.367/.452 w/RR) batting cleanup, went 1-4 with a triple and the run scored in the 4th, but dazzled more in the field as he retrieved multiple errant throws in addition to taking part in 2 of Round Rock’s 4 double plays. Pozo himself owes the 25 year-old at least a beer for not only saving a run on a misfired throw destined for center field on a 5th inning Ronnie Dawson steal attempt, but applying the tag to Dawson to give Pozo an undeserved Runner Thrown Out. It should be noted that Dorow, playing third base Friday, only happened to be in the area because of a defensive shift.

More fireworks are guaranteed (weather permitting) as the Dell Diamond Independence Day experience continues Saturday night with first pitch at 6:05 pm. Left-hander Brock Burke (0-3, 9.21) resuming his recovery from the torn labrum that robbed him of the 2020 season gets the nod for the Express while righty JP France (3-2, 4.14) takes the hill for Sugar Land. Burke, carrying an 0-1 record with to go along with an ERA of 6.75 (10.2 IP) in the season series, will be making his 4th start against the Skeeters in 2021.