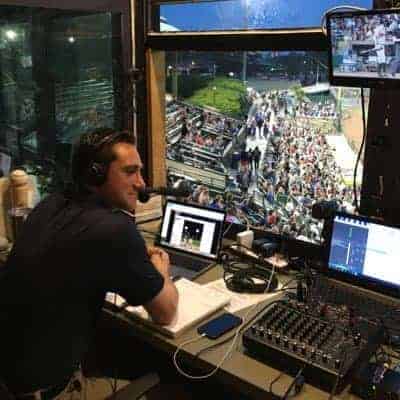 The RougherRiders can check an important task off their to do list this off-season. They announced last week on November 11th, that Zach Bigley is the next voice of the RougherRiders. Zach does have experience calling plays in multiple sports. This year he was the main play-by-play announcer for the Myrtle Beach Pelicans which is the Chicago Cubs Class A Advanced affiliate.

We reached out to him and he was gracious enough to answer some questions for us. He tells us which player he is looking forward to seeing the most, the most exciting play he has called and his daily schedule.

Zach, Congratulations on your promotion to Frisco! We are excited to have you as the new voice for the RoughRiders. Thank you for taking time to answer some questions for us.

We’ll start simple, What is your hometown?

Zach Bigley: I was born in Olympia, Washington, but I moved to Eugene, Oregon when I was six and grew up there! Eugene is home for me.

Who is your favorite broadcaster?

Zach Bigley: Growing up in the Pacific Northwest, Dave Niehaus, the voice of the Seattle Mariners, was my favorite broadcaster. He brought so much passion and love to his broadcasts and you could truly tell he loved what he was doing every day. Rick Rizzs, who was his partner, took over when Niehaus passed away in 2010. I love Rizzs as well because they were the two I grew up listening to.

Get out the rye bread and mustard, Grandma, it is grand salami time

When you aren’t calling games, what do you do in off season?

Zach Bigley: I have had many different jobs during the baseball offseasons, but this year, I am broadcasting games for McKinney ISD football and basketball through 97.5 KLAK in McKinney, Texas. High school football is a big deal out here, so it?s been a ton of fun to call these games!

When did you know that you wanted to do broadcasting?

Zach Bigley: I knew I wanted to be a broadcaster when I was in high school. I was a baseball player, but I knew I wasn’t good enough to play at Oregon, which is where I wanted to go. So, I decided that the best way to stay with the game I loved was to make a move to the booth. I called my first game my sophomore year of college (an Oregon volleyball match).

What was your favorite play to ever call?

Zach Bigley: I’ve had the incredible luxury to call some unbelievable plays over the last few years, but my favorite was probably this last season in Myrtle Beach when the Pelicans pitcher tried to field a bunt. When he bobbled it, the ball fell to the ground in front of him and, with his momentum carrying him towards first, he kicked the ball with his right leg to first for the out. It was a one-of-a-kind play by Javier Assad, the pitcher.

If you weren’t a broadcaster what would you be doing?

Zach Bigley: If I wasn’t broadcasting, I would probably teach. I love expressing my passion for history and writing, so I would enjoy teaching those subjects.

What are you most looking forward to next season?

Which player are you most looking forward to seeing in Frisco?

Zach Bigley: The Rangers certainly have a wealth of talent in their system right now. There are some pretty good players who will take the field at Dr. Pepper Ballpark in 2020, but Sam Huff is certainly a player that comes to mind first. While he was in the Carolina League last season, I had the opportunity to see him play for the Down East Wood Ducks and he was very impressive. In Myrtle Beach, the ball does not carry well to center field at all because the wind mostly blows in. Huff hit an absolute missile of a home run in Myrtle Beach to center that was over 420 feet, cutting through a strong wind. It was one of the most amazing shots we saw all year from anywhere. I’m sure he will bring that same power to Frisco.

We’re looking forward to seeing Sam Huff in Frisco and this year we will see him promoted. You’ve been able to see alot of talent. Who have you seen play that impressed you the most overall?

Zach Bigley: I have been extraordinarily fortunate to see some amazing players over my few years in the minors, but the best has to be Walker Buehler. He was with us for just a few starts at the beginning of the season in Rancho Cucamonga in 2017. In two different starts, he struck out eight-straight batters and blew away everyone with a crazy four-pitch mix. It was obvious he would be a major leaguer and he ended up joining the Dodgers later that season.

We always like to ask, what is your favorite home cooked meal?

Zach Bigley : I’m really not much of a cook, so I love lemon pepper chicken and pasta!

Last question Zach, What is your daily schedule like during baseball season?

Zach Bigley: The daily schedule is usually show up to the ballpark between 9 a.m. and 10 a.m. and get to work immediately. There are plenty of little things to take care of in the morning, such as scheduling, sending some emails, setting credentials and making sure things are set up for the game that night. From there, I usually knock out game notes, unless there is a pop-up press release or graphic that has to be done (which usually happens). After that, it’s writing stories, scripts or working on other projects that we are producing for more content. This usually takes us to batting practice, where I’ll make sure to chat with the players and coaches about different things and help any media that day that have come to the park.

After batting practice, we get the interviews that we need from the players or coaches. We then finish up making sure that all the correct papers, game notes, stats, rosters and such are where they need to be and do some last-minute prep for the game. We eat right before we go on the air and call the game. After the game, we write and send out the recap, help with any video and audio highlights that need to go out and start on the game notes or writing for the next day. I usually try to get out before midnight, but there are many nights where I have been in the ballpark until 1-2 a.m. Then, it’s back to the ballpark bright and early the next day!

Doing what Zach does is not easy and takes a huge amount of dedication.

We want to give a HUGE thank you to Zach Bigley for taking the time to answer our questions.

Replacing Ryan Rouillard is no easy feat but Zach is more than qualified to take over in 2020. Be sure to say “hi” when you see him at Dr Pepper Ballpark in 2020.