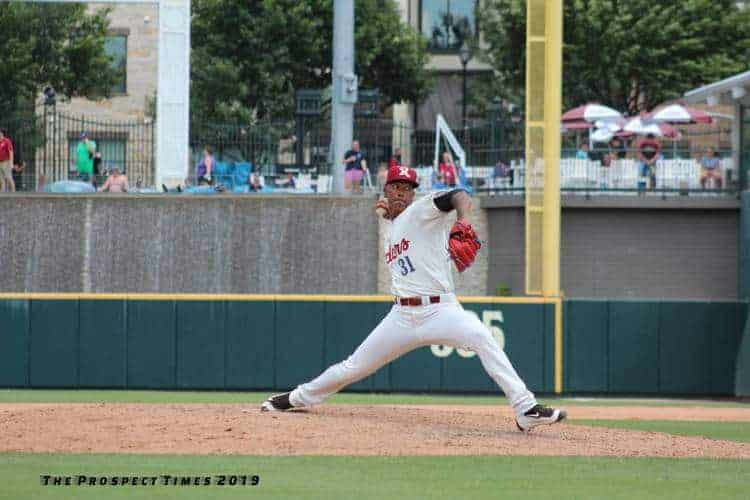 Some big news on the day was Emmanuel Clase was promoted to Frisco. Wei-Chieh Huang was recalled from the RoughRiders to the Rangers.

The Sounds have the day off.

The RoughRiders had another shutout as they beat the Travelers 1-0.

Need to give a shout-out to the others who came out of the pen to keep it scoreless.

Blake Bass (1.74) earned a hold during his 2 scoreless innings pitched. He allowed 2 hits and struck out 2.

Emmanuel Clase got his first inning of action the same day he promoted.

Clase pitched a scoreless inning throwing 6 pitches and striking out 1. Earning his first hold with the Riders. https://t.co/NTPrJ7ELfh

Got his 2nd save of the season. He pitched a scoreless inning allowing only 1 hit and struck out 2.

The lineup got 6 hits and nobody had a multi hit game.

Andretty Cordero went 1-4 with the RBI and struck out 2 times. His average is at .270 for the year.

Christian Lopes showed his wheels and stole his 2nd base. LeDarius Clark had a fielding error.

The Wood Ducks lost to the Hillcats 6-1. Tyler Phillips (1-1, 1.46) got the start for the Wood Ducks. This opposing line-up was the first to score a run off of Phillips. He pitched 5.2 innings and allowed 4 runs on 8 hits, including a home run and 3 strikeouts.

Michael Matuella (4.50) pitched a scoreless inning and struck out 2 in the process, throwing 13 pitches.

Yonny Hernandez batting lead off, went 2-3 with a walk and is hitting .292 on the year.

Eric Jenkins also went 2-3 with a strikeout and was caught stealing. He is hitting .231 on the year.

The Crawdads beat the GreenJackets 3-2. Yerry Rodriguez (2-1, 1.20) got the start for the Crawdads and had a strong outing. He lasted 6 innings allowing 1 run on 6 hits, 1 walk and struck out 7.

Wes Robertson pitched 2 scoreless innings and earned his 1st hold of the season. He struck out 1 and threw 33 pitches.

Scott Engler (2.89) pitched an inning and earned his 2nd save of the year. He allowed 1 run on a home run and struck out 1.

Curtis Terry went 1-4 with his 5th home run and struck out twice. His average is .258 on the year.

Miguel Aparicio went 1-3 with a run and is hitting .200 on the year. He got caught stealing a base as well.

Frainyer Chavez went 0-1 with 2 walks and a strikeout. He also stole his 1st base of the year.