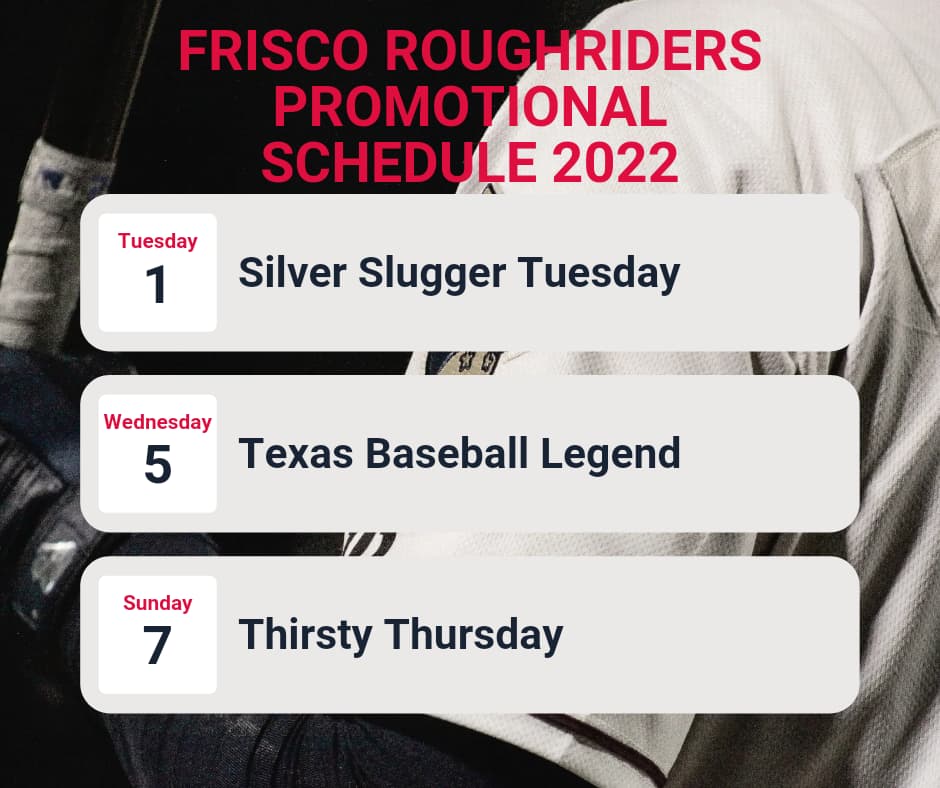 Baseball is almost back in Frisco and even though the team has yet to take the field, this season is shaping up to be the most exciting season to date. The 2022 Frisco RoughRiders promotional schedule was released last week and there is literally something on it that will appeal to everyone.

Opening Day on April 8th will feature the first Firework Friday of the season and Division Champions weekend with a magnet schedule giveaway. In total, the RoughRiders 2022 promotional schedule features 25 post-game firework shows that are sure to be a blast.

It also features 10 guest appearances, along with the most giveaways ever. The RoughRiders will also introduce fans to two new and exciting monikers. The Copa de la Diversion (team identity and uniforms will be announced prior to the season) and they will play three games as the Dallas Black Giants, paying homage to the former Negro Leagues team that played in Dallas. Bob Kendrick will be present at Riders Field and will throw out the first pitch. I have never been more excited about the team taking on new identities that I am for these two.

Bring your dog to the ballpark! For those that want to take Rover with them to the game, Bark at the Park is coming back on April 24th. The next one will be on May 29th and August 26th.

This season, the RoughRiders will be among the Copa de la League teams. Their first scheduled game is on Cinco De Mayo which gives a transformation on the Friday Copa identity. The RoughRiders Copa program will be presented by Baylor.

Gone are Weiner Wednesdays but replacing that $1 hot dog will be a Texas Baseball Legend where a baseball legend will be making an appearance for a meet and greet. The Baseball legends consist of Tom Grieve, Hall of Famer and former Rangers pitcher Fergie Jenkins, and others.

The RoughRiders give a disclaimer that giveaways are while supplies last and they are also subject to change.

The 2022 Frisco RoughRiders promotional schedule is probably the strongest one in franschise history.