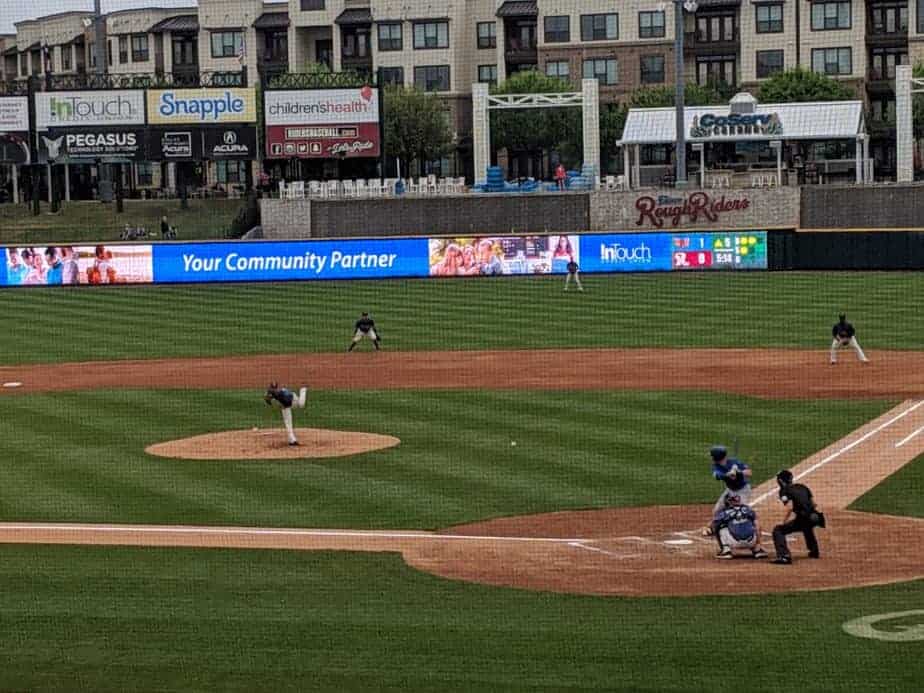 Thank you for joining Around the Farm once again! I fell short and did not release one for the games on April 11th. Working a full-time job and having 2 boys caught up with me and I crashed earlier than normal. The goal with this is to give you highlights of each Minor-League game played by the Rangers affiliates from the day before.

The Sounds were behind the whole game but put up 7 runs in the top of the 8th to win 73 over the Missions. It turns out that none of the runs were earned due to 3 errors that the Missions committed.

Before I get too ahead of myself, let’s look at the Sounds pitching.

Brett Martin (1.59) pitched a scoreless inning out of the bullpen walking 1 and striking out 2. He has pitched a total of 5.2 innings, walked 3 and struck out 7.

Danny Santana (.343 AVG, .939 OPS) went 1-4 with a strikeout. Also, just announced today, his contract as purchased and he will be in Arlington while Odor is on the IL for his sore knee.

The RoughRiders offense continues to fire on all cylinders. This is not at all what I had expected before the season, at least during the last 4 games.

Frisco has struck out just 56 times in eight games, by far the fewest in the Texas League.

Emerson Martinez (5.23 ERA) got the start for the RoughRiders. He went 4.2 innings and allowed 3 runs on 7 hits, 2 walks and 3 strikeouts.

Locke St John (0.00) has been Locking down his innings. He pitched a scoreless inning, allowing 2 hits and striking out 1 and earned his 1st save.

OK, that was easier than listing everyone individually. 1-3 each got 2 hits. Each of these runs scored without a baseball leaving the ballpark. The RoughRiders were 8-12 with runners in scoring position.

Andretty Cordero had a fielding error and Eliezer Alvarez got caught stealing.

The Wood Ducks were shut out by the Lynchburg Hillcats (Cleveland Indians ).

The line-up for the Wood Ducks only managed to get 2 hits, 2 walks and struck out 14 times! Both base runners attempted to steal. Bubba was successful but Perez was not.

Bubba Thompson has started off the year slow but he got 1 of the hits. He is hitting .133 on the year.

Yanio Perez got the other hit as the DH and his average is at .182. He got caught stealing.

The Crawdads lost to the Intimidators (White Sox) by a final of 6-4 but they are certainly not intimidated. Besides the RoughRiders, this Crawdads team is the one I am most excited about. The Man, The Legend, the Hans Crouse is here but probably?not?for long. There is also Chris Seise, Sherten Apostel, Jonathan Ornelas and Sam Huff.

Lets go back to the pitching.

Jean Casanova (5.63 ERA) got the start for the Crawdads going 4 innings. He allowed 4 runs on 7 hits and 3 strikeouts.

This was Around the Farm for 4/12/19. Thank you for checking it out and be sure to come back.

We want to take a moment to thank you all for following along! We appreciate you. What a great Winter for our Rangers!

Which #Rangers jersey are you going to buy?

The 2022 Texas Rangers are going to be must watch baseball for even just the casual fan.

I have this bookmarked.