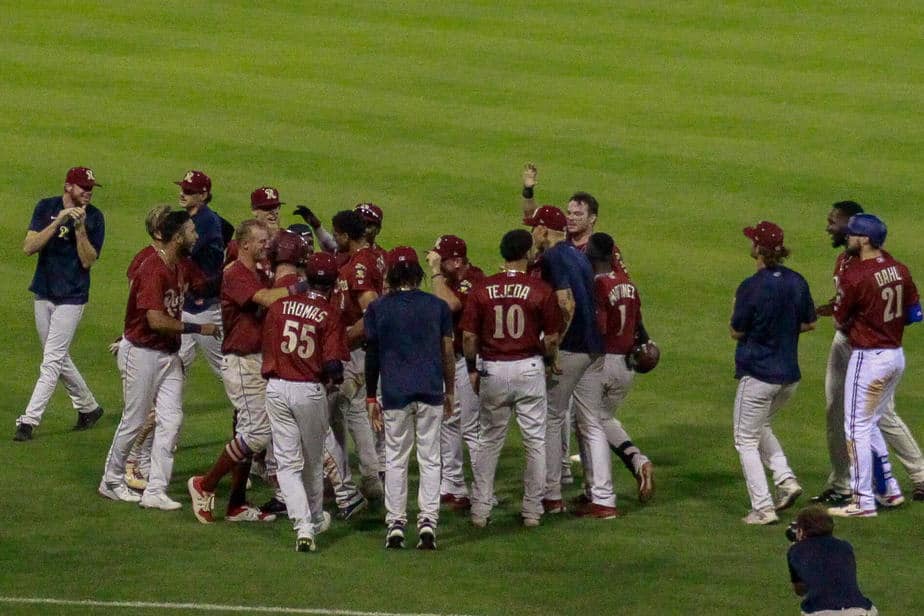 This RoughRiders won by a final of 3-1 over the Midland RockHounds (Athletics). With this win they have a team record of 11-wins in a row and a crowd of 2,523 was on hand to witness it. Something that no other team has done since the RoughRiders moved to Frisco in 2003. The previous record was 10 games in a row set in 2014 and tied yesterday June 29th. So how did the RoughRiders win their 11th game in a row? Behind some good pitching and timely hitting.

One of my favorites, Cole Uvila (1-1, 2.21) earned the win after tossing 2 scoreless innings. He allowed two hits and struckout two.

Stephen Villines (2.00) shut the door and earned his 3rd save of the season with 1.2 scoreless innings, allowing one hit and striking out one in the process.

The RoughRiders scored 3 runs on a total of 9 hits and they worked 3 walks.

The scoring started in the bottom of the 6th when Steele Walker (.257) singled to right field and scored rehabbing David Dahl (.500). That tied the game at 1-1.

In the bottom of the 7th, Anderson Tejeda (.203) was not satisfied with a tied game and hit his 3rd home run to left field to give the Riders the lead for good at 2-1. He went 1-3 with his solo shot and a walk.

Josh Jung (.311) added an insurance run in the bottom of the 8th, hitting his 4th homer of the season. Right now Jung is averaging a home run in every 11.25 at bats. He went 2-4 with his home run and struckout 2 times.

The RoughRiders committed one throwing error in the top of the 2nd. It was by Anderson Tejeda, his 6th error on the season and it ultimately didn’t hurt as they were able to escape unscathed.