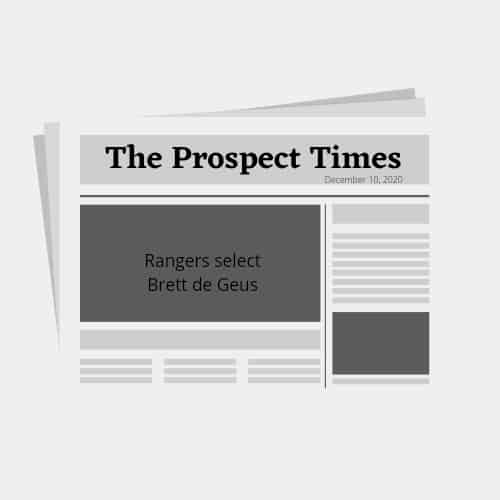 The Rule-5 draft took place today and the Texas Rangers selected Brett De Geus from the Dodgers. One of our Twitter followers asked if we liked any players in the Rule-5 and Brett was one of the players we included in the response.

Yes but not sure the Rangers select any. I like Brett de Geus but he’s a relief pitcher and hasn’t pitched above High-A. 2B Omar Estevez, then SP Parker Dunshee and a few more.

Brett de Geus, 23, is a right-handed relief pitcher that was drafted by the Los Angeles Dodgers in the 33rd round of the 2017 draft. He stands at 6’2 and 190 lbs and has not pitched above the High-A level.

For the Quakes, he had a 2-0 record with an excellent 1.16 earned run average and a 1.129 WHIP in 31 innings. Between the two levels he averaged 1.9 walks/nine innings and 10.5 strikeouts per nine innings. He also pitched 9.1 scoreless innings in the Arizona Fall League and only allowed 2 hits, 2 walks and 11 strikeouts.

He will have to stay on the Rangers active roster for the entire season if they want to keep him. I love this pick and think the Rangers may have gotten a steal.

Wivinis played two years at Kansas State and two years for the Eastern Illinois Panthers. In his four College seasons he had a 13-23 record with a 5.56 earned run average and a 1.527 WHIP.

During his time in college ball had Tommy John surgery and lost his scholarship.

The season of Independent ball with the Evansville Otters played a big role in him being where he is today. He had a 4-0 record with a 1.59 earned run average in 39.2 innings. He walked 19 and struck out 43 for 4.3 walks per nine and 9.8 strikeouts per nine.

Pozo, 23, was in the Rangers farm system. He signed a deal with the Padres but now he is back with the Rangers after they selected him the 2nd round of the Triple-A phase of the Rule-5 draft.

Pozo has played multiple positions including mostly Catcher, 1st Base, one game in the outfield and DH.

Rangers lost the following players in the 2020 rule-5 draft

The Rangers will get $24,500 from each of the teams that selected these players.

The Boston Red Sox selected Tyreque Reed from the Rangers in the 1st round of the Triple-A phase.

Davis was part of the Rangers return on the Yu Darvish trade. The Angels selected him in the 1st round of the Triple-A phase.

The Miami Marlins selected him in the 2nd round of the Triple-A phase.

Are you happy with the Texas Rangers Rule-5 draft results?