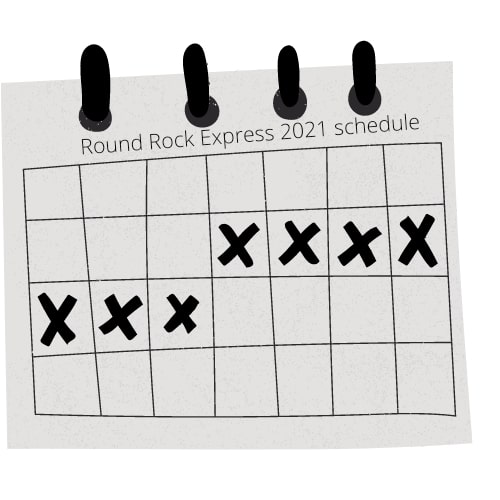 The Round Rock Express 2021 schedule has been released. They’ve also release some ticketing and safety guidelines that fans will want to know before heading to Dell Diamond.

There are 142 regular season games scheduled this year. Each series will be six games and will include Wednesday as an off-day and allow time for travel.

The home opener at Dell Diamond will be Thursday April 8th against the Las Vegas Aviators (Oakland Athletics). The first road series will be against the Oklahoma City Dodgers (Los Angeles Dodgers) at Chickasaw Bricktown Ballpark from Thursday April 15th through Tuesday April 20th.

The Round Rock Express are the Rangers new Triple-A affiliate. They were affiliated with the Astros but the Astros purchased the Sugar Land Skeeters, leaving the Nolan Ryan led group available to reunite with our Texas Rangers.

The Round Rock Express are now in the East Division of the Triple-A West League and joined by nine other teams in the league.

Tickets for the Round Round Express 2021 season will be available to the public but due to safety concerns from the city and MLB, they will be at a reduced capacity.

There will be pods with a certain number of seats available and will be spread 6 feet apart. Just about every team will have a set up similar to this for safety measures. As the season progresses, if safety guidelines are relaxed, more seating should become available.

The first few front rows may not be available to create a buffer zone to protect players.

Express season ticket holders will get first priority for tickets.

Tickets will be available on a first-come, first-served basis and any season ticket holders are encouraged to opt into any games they plan on attending when the windows open.

After a quick window for season ticket holders/members select their games, the remaining tickets will then be sold to the general public.

The Round Rock Express have confirmed that any unused credits for season ticket holders will roll over to 2022.

Will i have to wear a mask?

Yes, if you are older than two, a mask will be required. It is required at all times unless you are eating or drinking. So between bites or drinks, that mask has to be on.

This is sure to be an exciting season for Round Rock and we’ll see some exciting prospects come through the Dell Diamond this year. There are rumors that Josh Jung may start the season in Triple-A.